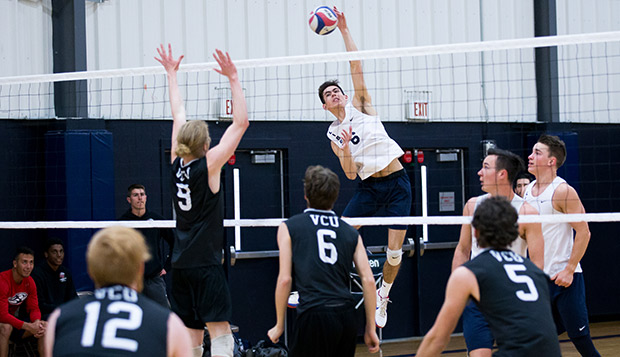 An extremely tall lineup and deep bench are two strengths of Liberty University's Division I men's volleyball team that eighth-year Head Coach Bryan Rigg wants to take advantage of throughout the 2018-19 season.

"This year we had the best recruiting class we have ever had," Rigg said. "We haven't had a freshman play on the DI team in four years and this year we are going to have two."

Joshua Knapp, a 6-foot, 8-inch opposite hitter from Maryland, and Cody Reinsma, a 6-5 outside hitter from Indiana, could start at those positions. They will complement 6-5 senior middle hitter Gene Dejesus, and outside hitters Brady Quakenbush, a 6-4 junior, Sean Taggert, a 6-3 sophomore, and 6-0 senior Andrew Eves, to give senior setter Kaden Knepper an array of talented spikers to assist on the front row.

"Gene (Dejesus) is our best player and he's in the middle, Brady (Quakenbush) was our most improved player last year, and Sean (Taggert) is an excellent outside hitter up from the DII team," Rigg said.

Zach Martyn, a 6-8 senior up from the DII squad, will challenge senior Jacob Holbert to back up Dejesus at middle hitter. Junior Daniel Koloff, who played opposite hitter last year, will shift to libero to replace Sam Wyman, who graduated, while Eli Plasterer, a DII setter the past three seasons, will compete for the defensive specialist spot.

With Assistant Coach Ryan Culkin stepping down after his fourth season in that role, Rigg will oversee the Flames' Division II squad as well until he can find a replacement by the spring semester. That team features nine freshmen with tremendous potential, including walk-ons Tait Lapham, a 6-2 setter from Lancaster, Pa., and Ben Dowd, a 6-6 middle hitter from near Boston. Junior libero Jared Patterson is the only returning player from last year's team that finished fourth at the National Collegiate Volleyball Federation (NCVF) DII tournament in St. Louis.

Rigg said 6-5 outside hitter James Morton and 6-4 outside hitter Lincoln Bergey bring a wealth of experience and would be starters on many DI teams. They will be complemented by 6-4 opposite hitter Logan Spieker, who is an excellent passer, and 6-5 middle hitter Luke Santini.

"A lot of these guys are 6-5, 6-6, and are touching at 11 feet," Rigg said of their vertical leaps. "That's another level for us. For years, we've been touching at around 10-6, and it's changing the whole dynamic of Liberty volleyball."

Defensive specialist Dylan Culler, another excellent passer, is adept at getting aces with the left to right movement on his serves.

Liberty will open its season with a home tournament next Saturday, Sept. 29, at the LaHaye Multipurpose Center, where it will entertain East Coast Volleyball Conference (ECVA) foes Virginia Tech, Virginia, VCU, and JMU, as well as a few NCAA DIII teams such as Delaware and Southern Virginia.

The fall schedule also includes an Oct. 13 trip to King University, an NCAA II school in Bristol, Tenn.; a Nov. 3 preseason ECVA tournament at JMU; and a Nov. 10 trip to George Mason, where the Flames will be one of two club teams in a field of 20 NCAA DI and DII teams; before concluding tournament play at Lancaster Bible College, Nov. 16-17

In the spring, Liberty will host the ECVA South tournament again before Maryland hosts the East Coast Championships and the NCVF Nationals are held in Denver, Colo.

"This will be as good a year as any to be contending for a national championship, for both teams," Rigg said. "Our DII squad is a great group of athletic volleyball players like we've never had before in our freshman class, and our DI team is a great mix of returning experience and young athletic ability."