DI Flames start at No. 9 in ACHA DI Preseason Rankings 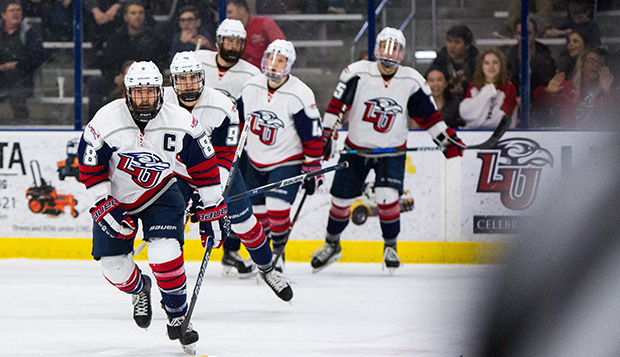 Liberty University's ACHA Division I men's hockey team moved up one spot from its final ranking of the 2017-18 season to debut at No. 9 in the ACHA DI Preseason Rankings, released on Wednesday.

The Flames took 2017 national champion Central Oklahoma to overtime before falling, 2-1, in the first round of the national championships in Columbus, Ohio, ending a 19-game winning streak that propelled them to the No. 10 position.

This season, after perennial last-place finisher West Chester and Rutgers dropped out of the league, all six remaining ESCHL teams are ranked in the top 25 — Liberty, Stony Brook (No. 15), Rhode Island (No. 20), New York University (No. 21), Delaware (No. 23), and Syracuse (No. 25).

Defending ACHA DI national champion Adrian College received 24 of the 25 first-place votes to secure the No. 1 spot in the preseason poll, ahead of Minot State, which got the other first-place vote and is ranked second followed by Illinois, Lindenwood, and Ohio.

The first ranking of the regular season will be released Oct. 3. The computer ranking starts Nov. 3 and will determine the 20 teams to qualify for the 2019 ACHA Men's Division 1 National Championships at the end of the season.

The Flames, who finished 30-7 last year, open their 2018-19 season next Friday at 7 p.m. against Penn State at the LaHaye Ice Center. The game will be webcast live by LFSN and picked up by ESPN3.