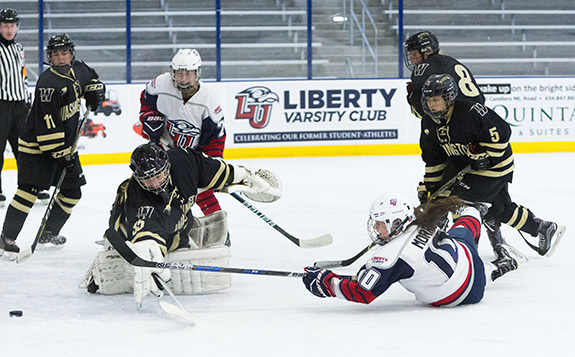 Junior forward Aly Morris stretches out on the ice to push the puck past the Washington Pride's goalie as senior forward Lauren McDonald looks on. (Photos by Nathan Spencer)

Liberty University's ACHA Division I women's hockey team improved to 3-0 on the preseason by sweeping the Washington Pride on Saturday and Sunday at the LaHaye Ice Center.

It was the first time the Lady Flames had won a series against the U19 travel team out of Bethesda, Md., in four years after being swept the past two years and going 0-1-1 against the Pride to open the 2015-16 season.

The Lady Flames netted two first-period goals in Saturday night's opener — the first by junior forward Aly Morris, who received an entry feed from junior defenseman Emily John along the left boards and made a diving put-away of a rebound of her own blocked shot out in front.

Junior forward Vanessa DeMerchant started and finished Liberty's second goal, sending the puck in front from behind the left side of the cage before emerging from the other side of the net and reaching over the Pride goalie to stick it inside the left post. With 6:06 left in the first period, the Lady Flames extended their lead to 3-0 when sophomore forward Alex Smibert finished an assist from Morris on a three-on-one fast break.

Washington ended Liberty junior goalie Nadia Rupoli's shutout bid less than five minutes into the third period before junior defenseman Rachel Gibson answered less than four minutes later with a one-timer from the top of the left circle off an assist from Smibert, who skated the puck out from behind the cage, for the 4-1 final.

With a quick turnaround, Liberty got off to a slower start in Sunday's 8:30 a.m. rematch before finishing with a flurry to complete the sweep with a 5-3 victory.

Freshman forward Grace Machholtz ended a scoreless tie 40 seconds into the second period before the Lady Flames stretched their lead to 2-0 on a power-play goal by John with 4:34 left in the period. The Pride cut the deficit to 2-1 moments later.

Liberty outshot its guests 14-2 in the second period and quickly padded its lead on a power-play goal by Smibert just over three minutes into the third. Sophomore forward Shannon Fehr put away an assist from DeMerchant less than five minutes later to give the Lady Flames a seemingly commanding 4-1 advantage.

Washington responded with two goals in the final two minutes of regulation before Liberty answered with an empty-netter by sophomore forward Shelby Bradford with 38 seconds left to ice the triumph.

Freshman goalie Megan Peterson made 17 saves to record her first win for the Lady Flames.

Liberty will complete its preseason schedule with two more exhibition games against the Carolina Eagles on Sept. 22-23 at the LaHaye Ice Center. The Lady Flames will open ACHA play Oct. 5 at 6:30 p.m. and Oct. 6 at 4:30 p.m. against Lindenwood-Belleville. 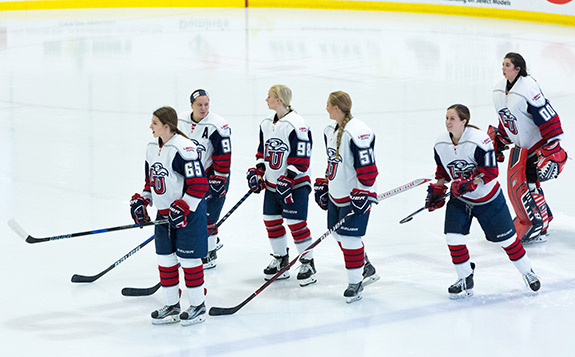