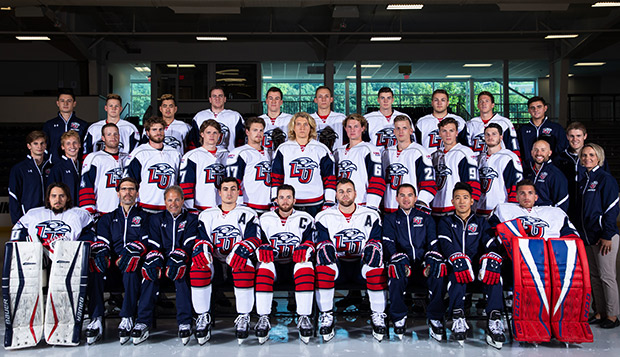 Despite having a program-record 19-game winning streak snapped in sudden-death overtime by defending national champion Central Oklahoma in the first round of last year's national tournament in Columbus, Ohio, Liberty University's ACHA Division I men's hockey team proved it can compete with the nation's best.

The sudden season-ending setback created a hunger within the Flames to return to that stage in late March, when the national tournament for all five divisions moves to Dallas, and continue to fight for their first national championship.

"We have the tenacity this year to know that we need to continue to move forward," Liberty junior defenseman Josh Bergen said. "We can't be satisfied with where we are. We want to move ahead and get that national championship as well as defend our (ESCHL) conference tournament and regular-season titles."

The Flames are gearing up to tip off their 35-game regular-season schedule, Sept. 21 against Penn State at the LaHaye Ice Center.

"Guys aren't satisfied with where we ended last year and there's a hunger to take it to the next level," said Head Coach Kirk Handy, who enters his 19th season at the helm. "Our focus is going to be on each day getting better and building from there."

Liberty returns all but two players from last year's squad while adding only one newcomer — junior center Andy Clarke, who served as a captain for the DII team last spring after playing at the DI level as a freshman.

"It's an older group of guys and there's leadership all over the place — from the goaltender to the defensemen and forwards," Handy said. "Having that experience makes a huge difference. The guys inside that locker room know the expectations we have for them and they've responded well so far in the first week or so."

"It's a good team," Thompson said. "Everyone has their own game and just has to do their job. Every game and practice, I'm getting a little better, a little stronger, and more confident."

The Flames will start the season with a 22-man roster, but may call up players from the DII squad who will practice with both teams.

"We went for a smaller lineup this year so that we can take guys up from Division II when needed," Handy said. "It's a great group of guys in there, guys who are working hard and pushing each other every day we're out there, on and off the ice, academically and spiritually."

Players returned in even better condition than they ended last season after following workout regimens set up by Liberty Coordinator of Strength & Conditioning Chris Kerr.

"You can tell that we've worked out over the summer," Bergen said. "You can see the improvement coming through workouts and practices, everyone's resilience to do the best that they can because they know that the effort we put in now is going to benefit us not only in our first game, but our last game of the season as well."

Handy said the Flames' overall speed will be a critical factor in their favor and their fitness levels will pay huge dividends in the third periods of games this season.

"Overall, we're a faster team than we were even last year and it plays into the system we want to play," he said. "We want to use our speed. That's a big thing for us this year."