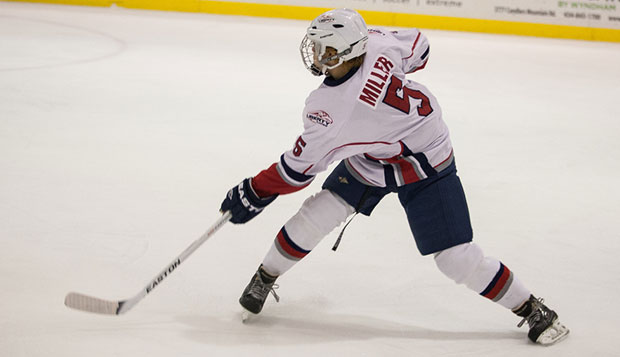 Senior forward Brent Boschman netted the first two goals for the Flames (17-9-2), midway through the first period off assists from Rick Turner and Luke Baumgarten, and then again 30 seconds into the second period set up by Baumgarten and Matt Sherry.

Cam Bakker scored a short-handed goal on a two-on-one break as Liberty seized a commanding 3-0 advantage with 9:40 left in the second period.

Christian Garland made it 4-0 with just under 4:00 left in the second period off nice puck movement on the offensive end.

"We had a great cycle in the corner and he got the puck off of a wall play and he stuck it in five-hole," Boettger said. "That was nice."

The Mountaineers (6-13) tallied their only goal 20 seconds later before Ryley Egan and Scott Morongell converted the only two goals of the third period in the final five minutes of the contest.

"It was an interesting game," Boettger said. "The first two periods, we played well for about 13-16 minutes, then it was like we were running around in circles. The last five minutes, we got to scrambling. Other than those 10 minutes, we played a pretty solid team game, especially in the third period, when we kept it simple."

Overall, Boettger was pleased with the Flames' performance.

"It was decent," he said. "There's some D-zone coverage refinements we definitely have to make yet, but I like the fact that different guys are contributing and we're asking players to play different roles."

With Lindsay LeBlanc out sick and Kyle Garcia sidelined by a disqualification, Boettger moved Andrew McCombe to the middle and put Paul Ingles on the right wing and Egan on the left and they worked well together.

"Everybody responded well," he said. "It's a great testament to the depth that we have and that the guys can accept new roles."

The Flames saved their best for last, and stayed out of the penalty box for most of the night.

"Patience showed for us in the third period, when we played much more solid … with patience and persistence," Boettger said. "Our discipline was good tonight. It was one of our better discipline games."

Liberty outshot West Virginia 48-29 and Blair Bennett made 28 saves in goal for the Flames, who will start Clayton Brown in the cage Saturday night.

The puck drops at 5:30 p.m. for the second game of the series in South Charleston before the Flames return to Liberty's LaHaye Ice Center for a 4 p.m. game Sunday against in-state rival Virginia Tech.