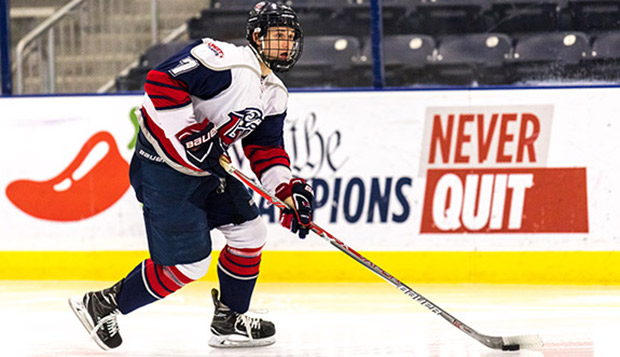 Returning forward Blake Flanders emerged as one of the Flames' top scoring threats as a freshman last season. (Photos by Joel Isimeme)

Nearly half of the 25-man roster for Liberty University's ACHA Division II men's hockey team is new this season.

The roster includes 13 returning players and 12 newcomers, all of whom are freshmen.

"I really like the personnel, the character that we have in the locker room," Flames Head Coach Ben Hughes said. "The only player we lost was (junior forward) Andy Clarke, who went up to the DI team."

Hughes and Liberty DI men's hockey Head Coach Kirk Handy are planning to shuffle a handful of players between the DI and DII squads.

"We're using a developmental model very much like a lot of the pro teams have in the NHL, AHL, and ECHL," Hughes said. "We want to have that feeder system throughout our teams to make our program better overall. We will have a couple guys every week practice with the DI team so they'll be ready to go up and play with them as needed."

The Flames' DII team will open its regular season against the same Mid-Atlantic Collegiate Hockey (MACH) DII squad from Penn State that Liberty's DI team debuts against on Friday, Sept. 21. The DII Flames will skate with the Ice Lions the following Saturday at 4:30 p.m. and Sunday at 2:30 p.m. at the LaHaye Ice Center.

"We're really excited to get going," Hughes said. "We want to make sure we're focused on developing and enjoying the process and our expectations are to get better each and every day."

"We're going to be pretty deep this year and our third line will have just as much of an opportunity to get points as our first line," Hughes said. "Our fourth and fifth lines will have to be hard to play against because they will be working really hard to apply lots of pressure and attack the puck, creating offense and making plays."

Adam Partridge, the brother of incoming freshman defenseman Aaron Partridge, is a sophomore returning in goal, where he will be complemented by Dakota Cyhaniuk, a freshman from Texas.

"We have a really strong defensive corps and we are really excited to see our goalies perform this year," Hughes said.

Senior captain Jackson Roy returns to anchor the defense alongside sophomore Kyle Martin, juniors Brandon Drumheller and Ryley Richardson, and senior Drew Crilly (12G, 14A), who is shifting back from attack.