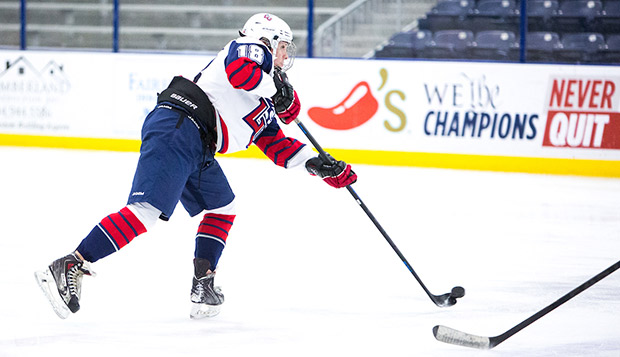 "We have a lot of defensive depth this season due to returning players like Sarah LaPorte and previous women's Division I players Holley Turner and Jazmine Miley," Liberty Head Coach Sara Niemi said.

They will be backed up by senior goalie Kelly Hutton, who played the past three seasons on the Lady Flames' DI squad.

Offensively, returning sophomore forward and leading scorer Brittany Hegele, who ranked third among ACHA DII players with 29 goals and 28 assists, will be complemented by a host of talented scorers, including returning senior Kira Rice and sophomore Alexis Early. Newcomers with ACHA DI experience include graduates Chelsey Greenwood, a forward and team captain last season; Catharine Burrell, one of the Lady Flames' top scorers on their 2015 ACHA DI national championship team who missed the end of her senior season in 2016 due to injury; and junior Shelby Burden, who brings exceptional speed on attack.

The Lady Flames, who opened their season with an exhibition game against the Hamilton (Ontario) Hawks on Saturday, will entertain the Carolina Aces this Saturday at 1 p.m. and Sunday at 11 a.m. at the LaHaye Ice Center, where they will also host a North Carolina U19 squad on Sept. 15 and 16.

"We have two more weekends of scrimmages which will allow the team to start developing chemistry quickly," Niemi said. "As coaches, we will be able to move the players around to find the right combinations for the right lines. (Assistant Coach) Rena (Leone) and I are really excited to get the season started Oct. 13 at home against Cal Penn."