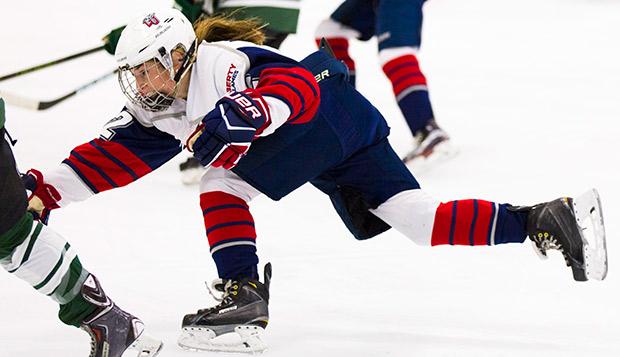 Senior forward Lauren McDonald has served as a catalyst for the Lady Flames for three seasons. (Photo by Jessie Rogers)

As the reigning national champions, Liberty University's ACHA Division I women's hockey team will debut its 2018-19 lineup on Saturday with a 2:30 p.m. exhibition opener against the Hamilton (Ontario) Hawks, after the Lady Flames' ACHA DII women take to the LaHaye Ice Center first for a showdown with the Hawks' second team at 11:30 a.m.

"They've been practicing here all week and we have had some good interaction with them," Liberty DI women's hockey second-year Head Coach Chris Lowes said of the Hawks. "They're a good program with talent and it's a good relationship."

Courtney Gilmour, one of two players to graduate from last year's team, formerly competed for Hamilton, as did incoming freshman forward Alexis Paulmert.

Lowes recruited a class of seven freshmen and transfer student-athletes, including one late addition from Adrian College. He is eager to get a first look at them and the Lady Flames' 18 returning players on Saturday in a low-pressure game situation. It is the first of five home exhibition games (followed by matchups with the Washington Pride on Sept. 8 and 9 and the Carolina Eagles on Sept. 22 and 23) before a 30-game regular-season schedule that includes 15 more home dates.

"It's not about results, but about us getting some touches, putting those game jerseys on for the first time together as a team, getting a bit of chemistry going, and starting our season," Lowes said. "We basically have the month of September, four or five weeks of practice before we start playing ACHA opponents."

This year's lineup will be at least as dangerous as last season's, with a 24-player roster featuring a plethora of talent at every position.

"On ice, we're in a good spot," Lowes said. "We bring some speed, some power, some playmaking and finishing. We're got depth and strength everywhere and should have the ability to pick up where we left off and set some lofty goals for ourselves. From top to bottom, it's a good group that will follow the game plan and commit to it. We're excited. It's going to be a fun year and a challenging year and a rewarding year for us as a program. The players are itching to get things going."

"We return seven defensemen from last year's team with a ton of talent and experience, so our D-corps should be a strength for us," Lowes said. "We're not built around one or two individuals, but from top to bottom. It's exciting."

Justin Forth and Leah Carlson return as Lowes' top assistant coaches and will be joined by former Lady Flames defensive standout Madison (Fischer) Pinel to balance out a staff that also includes video coach Josh Graham and Blair Bennett, who will help coach the goalies, and strength and conditioning coach Chris Kerr, husband of Chantal Kerr, who started in goal in last year's championship game.

"Maddie Fischer (Pinel), as an alumna, has been super valuable and involved this week in getting the girls acclimated," Lowes said. "She and Leah (Carlson) will work with player development, mentoring, and helping with some on-ice stuff. Last year was our first year as a coaching staff and our goal is to build on what we did schematically and strategically early and fine-tune all that we do on the ice."