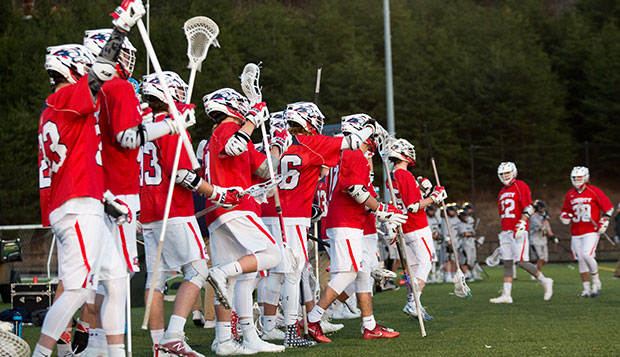 With its first trip to the MCLA Division I National Championships now in the books, Liberty University's men's lacrosse team has attracted an even more challenging slate of regular-season opponents for Spring 2019.

"Building on the success we had from last year, we have another great schedule to help represent our team as one of the best in the country," Flames Head Coach Kyle McQuillan said. "There are some familiar foes, but we also added some new teams including two that Liberty has never played — Oregon and Minnesota."

The Gophers will travel to Liberty Lacrosse Field to face the Flames for their annual "Midnight Mayhem" matchup on April 5.

Liberty finished 9-6 and ranked seventh in MCLA Division I last spring, when it went 7-4 against a regular-season schedule that the Massey Rating System ranked second in the nation in terms of strength of schedule. McQuillan said the 2019 slate, which will include four more games, will be even stronger with the potential for 10 of the 15 opponents to be ranked in the Top 25.

Among the highest-ranked opponents Liberty will face are No. 1, defending national champion Michigan State on March 13 in East Lansing, Mich., and 2015 and 2017 national champion Grand Canyon, ranked ninth, which it will meet in the first round of the Battle for Baltimore on March 21, possibly at the U.S. Lacrosse Headquarters. The Flames upset MSU last year in the tournament. They lost at Grand Canyon on a Spring Break 2015 trip.

"It's going to be the most difficult season in program history," he said. "I expect this to be one of the most difficult schedules in all of the MCLA, and we are looking forward to the opportunity to prove ourselves. This team is capable of doing great things this year."

Liberty will welcome returning players back and recruits and recruited walk-ons to tryouts from 3-5:30 p.m. Sept. 10-12. It will host its annual Alumni Game in conjunction with Liberty's Homecoming Weekend on Oct. 12 at 7 p.m. and its Fall Tournament (opponents to be determined) on Oct. 20 before hosting MCLA Northwest Region rival Virginia Tech on Nov. 9 at 7 p.m. and its annual Recruiting Showcase from 11 a.m.-1 p.m. on Nov. 10 at the Liberty Lacrosse Fields.

The Flames will travel to Blacksburg, Va., for the regular-season-ending matchup against sixth-ranked Virginia Tech on April 19, which will likely determine the top seed for the April 25-28 SouthEastern Lacrosse Conference (SELC) Championships in Atlanta, where they will contend for an automatic bid to the May 6-11 MCLA DI National Championships in Salt Lake City.

March 21 vs. No. 9 Grand Canyon (at Battle for Baltimore)