Wrestlers to host NCWA National Duals for third time in 2020 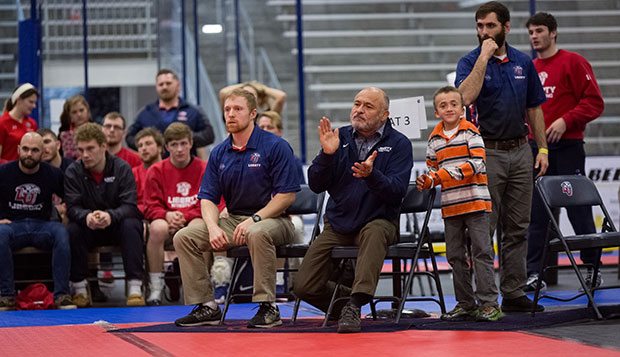 Liberty University's men's wrestling team, which won a record third NCWA National Duals championship last January at the LaHaye Ice Center, will travel to Mesquite, Nev., near Las Vegas, to defend its title this season before again hosting the event in 2020.

The NCWA decided last year that the tournament will be on the East Coast in even years and the on the West Coast for odd years.

Previously, when Liberty's wrestling team was an NCAA Division I program, it would travel to Reno, Nev., for an annual tournament. Mesquite will be the farthest the Flames have traveled since shifting to the NCWA, which has held its national tournaments in Florida, Georgia, and Texas. Flames Head Coach Jesse Castro plans to take 16-18 wrestlers to the National Duals, where he expects strong challenges from colleges and universities out West.

"The competition is pretty well spread out," he said. "Many of the stronger teams are on the East Coast, but we will see some pretty tough teams from the West Coast as well, including Brigham Young, which placed fifth (at the NCWA Grand Nationals) this year."

This past season, after winning the National Duals, the Flames went on to capture their seventh consecutive MAC Tournament title in February at the LaHaye Multipurpose Center and a second NCWA Grand National Championships crown in four seasons in March in Allen, Texas. Liberty returns a deep and talented lineup strengthened by Virginia Tech transfer Jeffery Allen and a few stellar incoming recruits, and will be among the favorites to contend for the three tournament titles.