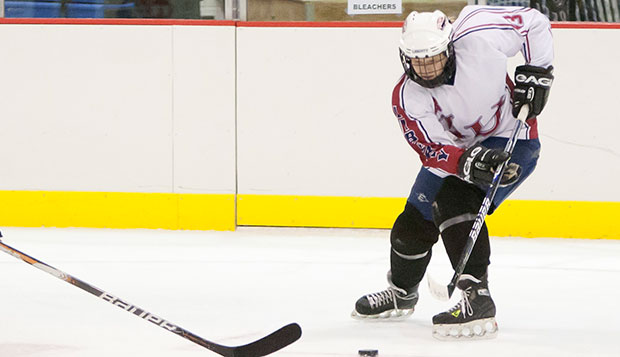 Liberty University's Division I women's hockey team, ranked No. 1 in the nation, shut out fourth-ranked Robert Morris University 3-0 in the first game of a two-game series Friday night in Chicago.

Stacey McCombe started the scoring off an assist from Sarah Stevenson with 4:20 left in the first period.

"They were just working it in their end and Sarah got a little chip out to Stacey and she buried it," Bloomfield said. "The goalie didn't have a chance to respond."

Seven minutes into the second period, the Lady Flames worked the puck up ice with Courtney Fischer sending an assist to defender Autumn Kucharczyk, who took advantage of Robert Morris's goalkeeper being screened and rocketed a shot past her.

Finally, with 6:44 left in the second, Nikki McCombe received a pass from Keeley Besinger and netted the final goal.

Samantha Rupp posted the shutout for the Lady Flames in goal.

"Sam played an excellent game and was rewarded with another shutout," Bloomfield said.

Robert Morris (18-4-2) had lost two out of three games in its last series against Rhode Island after tying Massachusetts and Ohio State in its previous two games.

The Lady Flames will return to the ice in Chicago at 8:30 p.m. (EST) Saturday night to conclude the series.