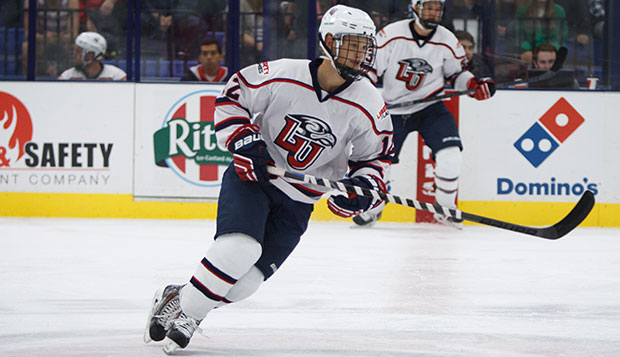 Christian Garland played forward for the Flames' Division I men's hockey team from 2011-15 and the DII squad from 2015-16.

"I definitely can relate to these players on some level and it will be a good opportunity to give back and be a positive influence on the lives of these young men," Garland said. "I know very well that the culture on the DII team is very strong and that a spiritual emphasis is at the core of everything. Obviously, success on the ice is ideal, but it's more about developing players as individuals and spiritual leaders. It's not about any one person."

The New Brunswick, Canada, native, who played a pivotal role on both the DI and DII teams' penalty kill units, will focus on coaching the forwards in the defensive zone. He will take the place of Assistant Coach Blair Bennett, a DI and DII teammate of Garland's who played with him on Liberty's national championship runner-up DII squad in 2015-16.

"Blair will no longer be an assistant coach assisting with practices, on the bench, and traveling with the team, but he will still remain our goalie coach and strength coach," Hughes said. "Christian will step in and fill that void on the bench and run the defense and the penalty kill."

Garland, who also played with Hughes and DII Assistant Coach Danny Logan (who coaches forwards in the offensive zone and the power play) for two seasons at the DI level, is eager to get back involved with the sport that he spent five seasons playing while pursuing his undergraduate and graduate degrees.

"I am really excited to get started, get the season going, meet all the new guys, and hopefully continue to build on a successful foundation," said Garland, who has worked in Liberty's Information Services department since November.

Returning and incoming Flames players, recruits, and walk-ons will report to preseason skating sessions at the LaHaye Ice Center in the next few weeks. Tryouts are scheduled to start Aug. 26 and run through Sept. 1, when the DI, DII, and DIII rosters will be finalized. Liberty's DII squad will open its season Sept. 15 at home against the University of North Carolina.