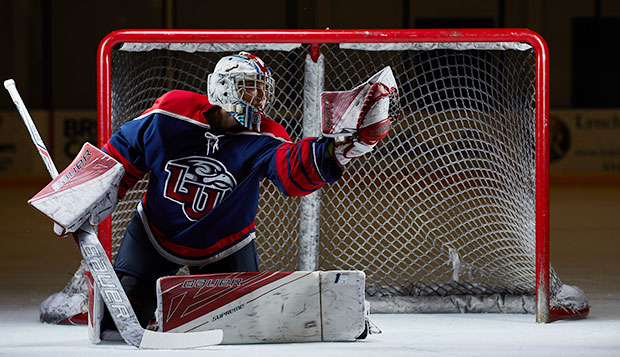 With 2018-19 season openers for Liberty University's ACHA Division I, II, and III men's hockey teams less than two months away, tryouts for the teams are scheduled for Aug. 26 through Sept. 1 at the LaHaye Ice Center.

Prospective players for all three squads should register online in advance.

"Once they register online, we will organize the first skate and reach out and communicate to them where and when they will play," Flames' ACHA DII men's hockey Head Coach Ben Hughes said.

A new player meeting will take place in the rink lobby on Sunday, Aug. 26 at 11:30 a.m., before the first of Sunday's three tryout games starts at 12:15 p.m. Three more games will be played on Monday, Aug. 27, with the first faceoff at 3 p.m. Two games will be held on each of the last five days of tryouts and rosters for all three teams will be finalized following Saturday's second contest, starting at noon.

The tryout schedule is posted on the three teams' respective Club Sports pages.

There will be skating sessions before most tryout days, which include practice drills, speed, strength, and skills competitions, and scrimmages Monday through Friday, starting at 3 p.m.

Hughes noted while many roster spots are all but set for returning standouts, players can move up or down the ranks based on their performances in tryouts.

"I'm excited to see what happens this year," he said. "It's always cool to see guys come back and surprise you by being in even better shape than they were in at the end of last season. There will be a lot of opportunities for new players coming in and trying out. Anything could happen."