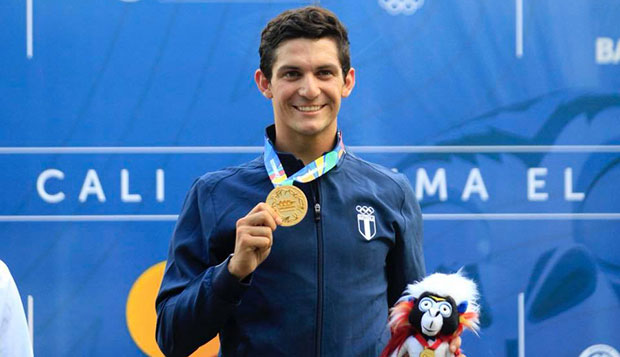 In both events, Fernandez edged Mexico's Manuel Padilla, winning the individual competition by a margin of 1,461-1,449 and teaming up with Sofia Cabrera — the individual women's runner-up from Guatemala — to top Padilla and Mariana Arceo, 1,465-1,460. The modern pentathlon combines running, swimming, and equestrian events with pistol shooting and fencing.

The gold medals qualify Fernandez to compete in the 2019 Pan Am Games, in Lima, Peru. With a top-five finish there, he will represent Guatemala at the 2020 Summer Olympics in Tokyo.

"I was going for a medal, but my main focus was to perform well," Fernandez said. "Everything else I would leave up to God, knowing that in sport anything can happen."

Fernandez, 22, is living proof of that, and a living hero to the people of Guatemala.

At 18, Fernandez qualified for the 2016 Summer Olympics in Rio, where he placed 15th, after becoming the youngest to win the modern pentathlon at the 2015 Pan Am Games in Toronto. One week after his Olympic performance, he struck gold at the Junior World Championships in Cairo, Egypt, elevating his world ranking to No. 4.

"Coming back to my country with two medals was definitely a huge blessing," Fernandez said. "I was able to share these moments with these people who fight every day to get out of poverty, and to give them the hope of Christ. That is why I do what I do, to be a light of Christ unto the nations in this sport."

Born in Dayton, Ohio, Fernandez is one of three children of Heidi and Carlos Fernandez, originally from Ecuador and Guatemala, respectively. For the past 17 years, they have operated My Father's House, an evangelistic ministry near Antigua that promotes education, medical care, sports, and construction projects to the Mayan population in the surrounding mountains.

Fernandez's father, Carlos, was a pentathlete himself and introduced Charles and his younger brother, Danny, to the sport in their early teens. After earning his high school diploma through Liberty University Online Academy, Fernandez moved to Lynchburg, where he studies economics through Liberty's online program and trains at the university's world-class athletic facilities such as the new Liberty Natatorium, Indoor Track Complex, Liberty Mountain Gun Club, and Equestrian Center.

"Liberty has some of the best athletic facilities in the whole world," Fernandez said. "I've trained in Olympic pools from Italy to Egypt and the facilities here amazed me. That was one of the reasons I chose Liberty to begin with, as well as the Christian education."

Fernandez's world ranking in the pentathlon slipped to the 150s over the past two years as he missed most of the world championship events while focusing on his studies. But his ranking rose back into the top 100 after a three-week European tour this summer when he competed in Bulgaria, France, and Poland and he expects to be in the top 50 after his success in Colombia.

After returning from Europe in early June, Fernandez and his girlfriend, Kristen Bray, who is studying nursing at Liberty, worked alongside his family's ministry to help the people of Guatemala in the aftermath of the Fuego volcano eruption, which killed more than 100 people just 10 miles from Antigua. Instead of climbing Fuego, which they had planned to do that week, they started a GoFundMe page and raised $2,000 to provide food, water, personal hygiene items, and clothing to survivors of the natural disaster, who were already living in extreme poverty.

Fernandez will stay extremely busy this fall as he ramps up his training for the 2019 Pan Am Games and 2020 Olympics. In addition to swimming for the Flames with his younger brother, Danny — a sophomore strategic marketing management major who serves as his primary training partner during the school year — and working with the men's triathlon, equestrian, and shooting sports teams, Charles may join Liberty's fencing club. Fencing is Fernandez's strongest of the five events in the pentathlon.

He will stay in Guatemala for the next six weeks to train with former Romanian Olympic pentathlete Marian Gheorghe in preparation for the Sept. 6-15 World Championships in Mexico City.