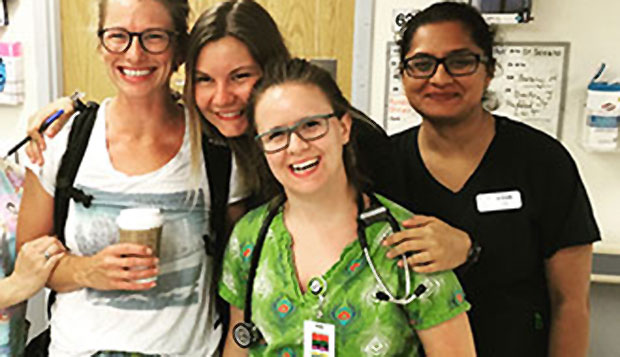 Amanda Grainger, who played forward on Liberty University's ACHA Division I women's hockey team from 2011-15, was just starting her evening shift at Royal University Hospital in Saskatoon, Saskatchewan, when she heard the news of the April 6 bus crash involving a tractor-trailer that killed 16 members of the Humboldt Broncos Junior "A" hockey team.

"I was actually one of two charge nurses on my floor that night, so from the moment we got into work, we were finding ways to help and prepare," said Grainger, a School of Nursing graduate who has been a full-time registered nurse at the hospital for nearly three years. "When the code orange alarm went off, meaning we would be dealing with a mass-casualty situation, we were joined by others from all the different wards in the ER to prepare and assist any way we could."

A steady stream of patients transported by ambulance and airlifted by helicopter from the scene of the 5 p.m. accident — about a 90-minute drive from the hospital — arrived through the early morning hours. Of the 16 team members treated there, 14 survived.

"I was involved in triage and trying to get them as stable as possible before sending them to whatever tests and procedures they needed," Grainger said. "I was also involved in helping the families find out where they needed to go and keep track of who was here for what patient so the doctors could give them an update. I also helped with the other patients in the ER that weren't involved in the crash. Basically I was just doing whatever they needed me to do."

Grainger said it took a complete team effort from hospital staff and volunteers to meet the urgent needs.

"Everyone had a job and everyone did it to the best of their ability, despite the circumstances," Grainger said. "Over such a chaotic weekend, there was a sense of peace in the hospital. Everyone was working toward one goal and we were all doing it together."

Grainger, who grew up in nearby Warman, Saskatchewan, shared a bond with the victims and survivors, developed on road trips across Canada as a youth player and throughout the United States with the Lady Flames.

"The hockey world is a small and close family," she said. "Being a hockey player myself and being from a small tight-knit province, even if you did not know the players and staff members of the Humboldt Broncos personally, you still had a connection with them. Down in the ER and ICU, there were lots of tears not only by the victims and their families, but also by the healthcare workers who were hurting for them."

Grainger's hockey career at Liberty culminated in the program's first ACHA national championship in 2015, which she helped achieve while completing her demanding undergraduate studies and clinical work.

"Having to overcome obstacles and learning to push through difficult and tiring tasks helped on the night of the tragedy, for sure, as well as being able to relate to the team and family members," she said.

Grainger credits her education at Liberty with preparing her to remain calm in the immediate aftermath of such an overwhelming tragedy.

"I definitely put some trauma training from school to use that night, prioritizing, and communication," she said. "Our professors taught us to never stop learning and to be mentors for our peers. To this day, I hear a voice in my head of Professor (Lucinda) Drohn while I am at work and I think ‘What would Professor Drohn do?'"

Drohn, a 25-year veteran ER nurse who has been teaching at Liberty since 2002, commended Grainger for carrying the school's banner in an admirable way.

"Our students are our legacy," Drohn said. "They go out and grow into their role and they touch lives. Each one of us in the School of Nursing have had an opportunity to funnel into them bits of themselves. I'm so happy she has found a niche."

Drohn noted that Grainger was in the School of Nursing's honors program and maintained a high grade-point average even with a busy hockey schedule.

"Amanda was a solid student who did amazingly well in the program," she said. "She always kept her heart on her sleeve, and had a passion for doing this work. For her to be a student-athlete and to maintain her academic and clinical excellence, she was literally burning the candle at both ends. She did what she needed to do and she always was striving to learn more." 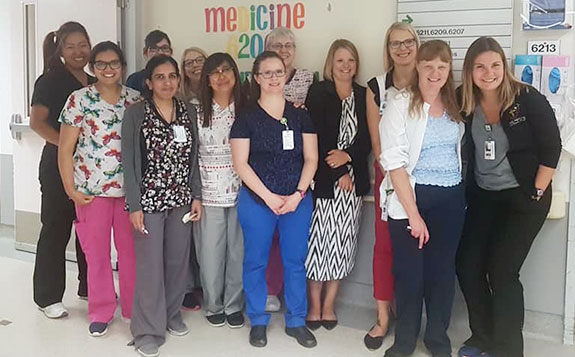 Amanda Grainger (center) graduated from the Liberty School of Nursing's honors program in 2015, when she helped lead the Lady Flames' ACHA DI hockey team to its first national championship.