Camps draw record crowd for faith-filled action on, off ice 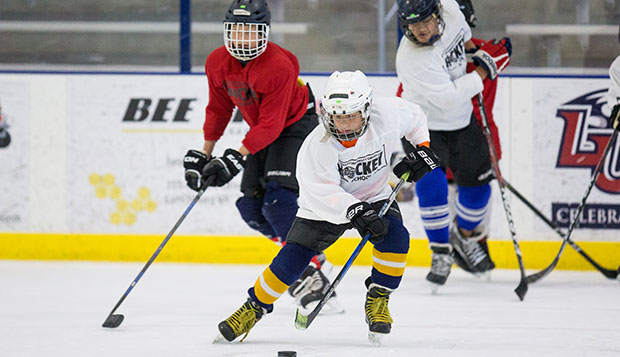 Fast-paced action at the LaHaye Ice Center has been nearly non-stop for 12 hours per day this week — in the heat of summer, no less — with a record turnout of 110 youth hockey players enrolled in the Liberty University Christian Hockey School, which wraps up its 11th year of weeklong day and overnight camps for boys and girls of all ages on Thursday.

As the first school in the nation to sponsor ACHA teams at all five levels — Division I, II, and III men and Division I and II women — Liberty continues to grow the game of hockey in the greater Lynchburg area, even in the offseason.

Last week's boys day camp attracted 65 youth between the ages of 5 and 12 and this week's boys overnight camp for U16 Bantam and U18 Midget players was nearly twice as popular, drawing campers from across Virginia, North Carolina, and Washington, D.C., and as far away as Pennsylvania.

But Liberty ACHA Division I men's hockey Associate Head Coach Jeff Boettger, who leads on-ice instruction for both boys camps, said the school's purpose is much greater — to develop Christ-centered hockey players, regardless of their career potential in the sport.

"It's a holistic focus," Boettger said. "Our goal is to see the players grow as men, which is as or more important than their on-ice game."

He said when it comes to recruiting student-athletes to compete for the Flames, he and Liberty DI Head Coach Kirk Handy are at least as interested in a player's leadership ability and personal integrity as their hockey skills.

"As a coach, we look for character, even over high-end talent," Boettger said. "Obviously, you have to be a good hockey player, but if you're not wanting to learn, if you don't have a good attitude and a team-first mentality, you're not going to go too far."

"They've both done a great job of helping me learn more about my game and work on my technique, which is something that I really appreciate," Foley said. "I feel like each time I come here, I learn more. I develop my game, become a better goalie and a better person by coming closer to God."

"You need the character guys to step in and direct these young guys, to maintain safety and just be wise as they deal with them," Boettger said, noting that the on-ice staff are primarily focused on overseeing the action between the boards and counselors are tasked with being by the players' side the rest of the day.

In addition to 12 hours a day of drills and practice and scrimmage time on the ice — a total of two and a half hours for four groups of close to 30 players in morning and afternoon sessions — camp participants attend daily chapels  and a Wednesday night worship service in the LaHaye Event Space.

This is the second year Griffin Camacho, a 15-year-old defenseman who plays for the Hampton Roads Whalers in Chesapeake, Va., has attended the camp and he plans to return as much for the spiritual growth and socialization as the progression of his all-around game.

"I've learned about God and how He impacts peoples' lives, and He has impacted my life," said Camacho, whose favorite things about hockey are checking opponents and assisting teammates' scores. "It's exciting, practicing hard and making more friendships and bonding off the ice."

When they're not hanging out with campers and counselors, participants enjoy Liberty's wide range of recreational activities including beach volleyball, Ultimate Frisbee, and basketball, swimming, and conditioning at the LaHaye Recreation and Fitness Center.

"Liberty has great facilities and we want to expose them to all of that as well," Boettger said. "It gives them something to do and it's great cross-training. They'll meet with (Club Sports Coordinator of Strength and Conditioning) Chris Kerr and his team for some foundational workouts. We definitely use whatever Club Sports has to offer to help with a player's growth, off the ice, on the ice, in every area." 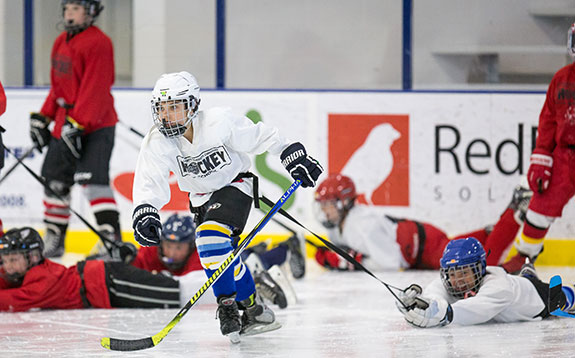