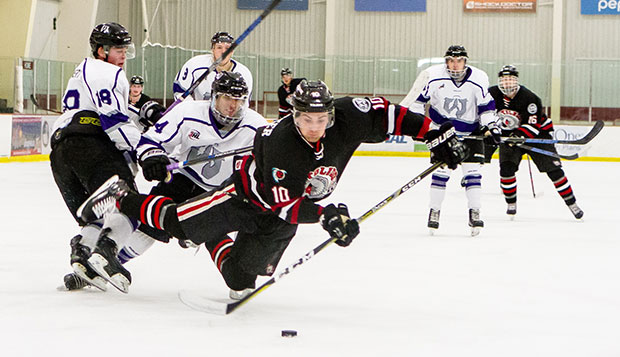 Darren Carter scored for the Toledo (Ohio) Cherokee on this play, nominated as one of the NA3HL's best goals of 2018.

A series of injuries suffered last spring while playing for the Cleveland Barons in the Tier I Elite Hockey League might have forced forward Darren Carter to hang up his skates.

Instead, after receiving a calling from God and reviving his career with the Toledo (Ohio) Cherokee of the NA3HL this past winter, Carter will join Liberty University's ACHA Division II men's team this fall.

"I was out for nine months with serious injuries after playing two weekends with a torn meniscus and torn ACL, a torn tendon in my hand, and a partially torn AC joint and rotator cuff," said Carter, who underwent surgery and stem cell treatments in April 2017 before continuing physical therapy on his knee and shoulder injuries through December. "Over that summer, I heard from the Lord that I was supposed to keep playing hockey, that hockey would be my mission field where I would impact lives for Him."

After Christmas, Carter reached out to Flames AHCA Division I men's hockey Head Coach Kirk Handy, who invited him to visit Liberty over its College For A Weekend (CFAW) in February.

"He showed me the (LaHaye Ice Center) rink and we talked about the program," said Carter, who later participated in the Flames Hockey Prospect Camp in April, when he met players on Liberty's DI and DII teams, and a Team FCA Select Camp/Tournament held at LaHaye from May 31-June 3.

Flames ACHA DII men's hockey Head Coach Ben Hughes noticed Carter — who is 6-feet, 4-inches tall and weighs 205 pounds — at the two camps at Liberty and Carter committed to start his collegiate career on his squad in June.

"His physical stature is one of his strengths as a player," Hughes said. "He's got a great attitude and I think he'll be a valuable asset wherever we put him in the lineup. The most important thing for us is getting players who want to be at Liberty — guys who want to get better and who want to learn every day, on and off the ice."

Carter, whose knee and shoulder are back to nearly 100 percent, isn't gripped by a fear of re-injury.

"My mindset hasn't changed at all," he said. "I probably should be afraid, but I'm just happy to have a chance to keep playing the game that I love."

Besides God, Carter's parents — Morrison, who grew up playing rugby in Australia, and Kristen — are two of his greatest influences, and supporters.

"My mom skated growing up and all of her brothers played ice hockey as well," Carter said. "She taught me how to skate when I was 3 and I've been playing since then. They're my biggest role models and they knew this was what the Lord wanted me to do."

This summer, Carter is doing on-ice workouts in the morning before working a landscaping job throughout the day. This week, he is playing on one of two FCA Hockey teams in the Chowder Cup in Foxboro, Mass., near Boston.

As a player, Carter — who plans to pursue a project management degree through Liberty's School of Business — takes a blue-collar approach to the game. He is equally adept at scoring the grinder goals in the crease as he is off a slapshot from the perimeter.

"If need to get something going, I'll crash the net," he said. "I'm not looking to start something, but if it's what the team needs, I'll do it. I'm an energy guy, someone who is able to make plays, big hits that can get the team going. I am able to lead and motivate the team and try to be a positive voice on the bench."