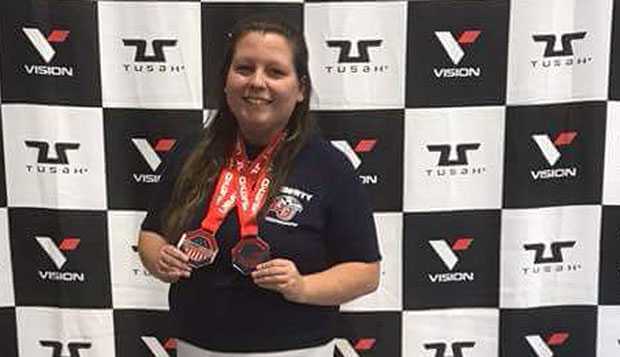 Rising senior yellow belt Briana Bendon was Liberty University's only representative at last week's USA Taekwondo National Championships in Salt Lake City, where she captured a silver medal in fighting and a bronze medal in forms.

Bendon the top-seeded senior (18-32) in the women's yellow belt heavyweight sparring bracket, finished runner-up to Wendy Pham from Texas, who scored a 21-13 decision in the championship bout.

She also placed third in forms with a combined score of 4.27, behind only gold medalist Rebecca Hao (5.80) and silver medalist Grace Hillaker (5.43).

"She has been working out with a Liberty alumnus, Grand Master John Park, in New Jersey," Liberty taekwondo Head Coach Tom Childress said. "This past year was her first year on the team and she was ranked collegiately, but this finish at nationals will move her up even higher in the national rankings."

Liberty had a record 39 members on its men's and women's taekwondo teams this past year and sent a program-record 22 competitors to the National Collegiate Taekwondo Association (NCTA) National Championships at American University in Washington, D.C., in early April.