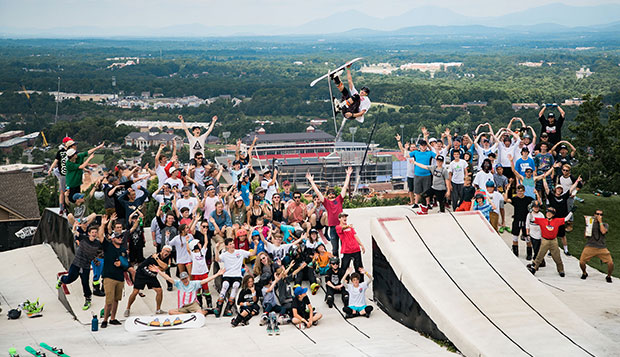 Next Level Summer Camp participants pose in front of the main jump at Snowflex. (Photo by Kevin Manguiob)

More than 150 youth ages 6-18 flocked to Liberty Mountain Snowflex Centre (LMSC) for Liberty University's overnight Next Level Ski & Snowboard Summer Camps over the past two weeks, with another 75 expected for the Next Level Day Camp July 9-13.

"Everything has run really well and the weather's been good," said Liberty Head Coach Isaac Gibson, who is assisting LMSC General Manager Ryan Leeds in directing the camps. "There's been a lot of progression, a lot of kids learning new tricks, and they're having a great time."

Training sessions are held in the mornings and evenings, before and after daily temperatures reach their peak. When they're not on the slopes, campers enjoy a wide range of recreational outlets that Liberty has to offer — from the Liberty Mountain Skate Park, located in the nearby Candlers Station, to the Rock Wall and Aquatics Center in the LaHaye Recreation and Fitness Center. Snowflex is still open in the afternoons for campers to use the aerial awareness trampoline.

For the last three days of camp, after the skiers and snowboarders adjust to LMSC's synthetic surface-covered slopes, they are able to practice their aerial stunts more safely by landing in a Bagjump air bag.

The camps are led by LMSC staff, members of Liberty's ski & snowboard teams, and approximately 35 instructors and counselors from Skiers & Snowboarders For Christ (SFC) chapters around the United States and Canada. Gibson leads the Liberty SFC chapter with assistance from team members. Starting in August, Leeds will serve in a full-time position with SFC in Colorado as its director of leadership development.