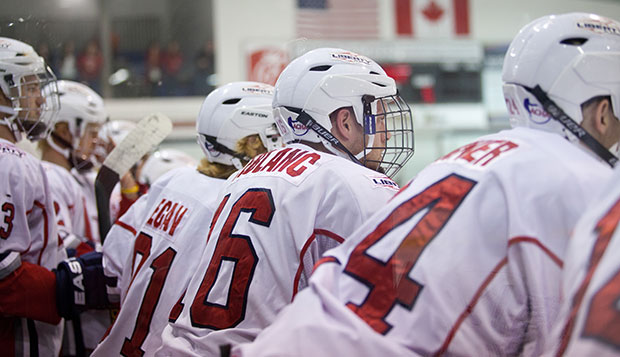 Fresh off a 2-1 road trip to Phoenix, Ariz., that included third-period come-from-behind wins over Arizona and a 4-3 eight-round shootout loss to the ACHA's top-ranked team, Arizona State, Liberty University's Division I men's hockey team travels west again this weekend — only not nearly as far.

The 10th-ranked Flames visit West Virginia for back-to-back contests on Friday and Saturday nights before renewing their annual in-state rivalry with Virginia Tech on Sunday at the LaHaye Ice Center. Opening faceoffs at West Virginia are on Friday at 9:30 p.m. and Saturday at 5 p.m. at the South Charleston Memorial Ice Rink. On Sunday, the Flames and Hokies will take the ice at 4 p.m.

Liberty Scouting Report: After winning their first eight contests and dropping nine of 10 from Oct. 5 to Nov. 17, the Flames have now won seven of their past nine games. Seven of their nine losses, and both of their shootout losses, have come against teams ranked in the top 10. Liberty maintained its No. 10 ranking in last Friday's ACHA poll, which is where it ended the 2011-12 season after going 23-7-5.

Brent Boschman has started the new year on a tear, scoring the first goal against ASU to ignite a comeback from a 3-0 deficit, adding two goals in the first game at Arizona, a 7-6 triumph, and one goal and three assists in a 7-5 victory over the Wildcats on Sunday.

Senior forward Rick Turner still leads Liberty and ranks fifth in the ACHA in points with 55 (32 goals, 23 assists) after netting three goals in the two wins over Arizona.

Ryley Egan, who scored two third-period goals in Friday's opener against the Wildcats to spark the comeback, ranks second on the Flames with 34 points (12 goals, 22 assists), and Lindsay LeBlanc ranks third with 33 (13 goals, 20 assists). Fellow forward Luke Baumgarten had a hat trick in Saturday's second game against Arizona to move into fourth place on the team in scoring with 25 points (11 goals, 14 assists).

Blair Bennett (3.14 goals against average) improved to 9-5 in goal for the Flames, but gave up four goals in the first period and a half of the opener against the Wildcats and was replaced by Clayton Brown (7-5-1) who got the win in relief.

West Virginia Scouting Report: West Virginia went 27-14 last year, the last under Zach Sonnefeld, who is now an assistant with the Wheeling (W.Va.) Nailers of the ECHL. Sonnefeld led the Mountaineers to the second round of the ACHA national tournament last spring.

Rob Borcky has logged the most time in goal, but has struggled to a 1-8 record and a 3.75 goals-against average in 512 minutes. Eric Schaetzle has more impressive stats in goal, with a 4-3-1 record and a 2.36 GAA in 508 minutes, stopping 92 percent of opponents' shots.

Virginia Tech Scouting Report: Following a 3-0 start with wins over Duke, East Carolina and Delaware, the Hokies went 2-6-1 in October before righting themselves with seven straight victories, capped by a 5-2 triumph over West Virginia last Friday. Tech, ranked seventh in the Southeast in the ACHA DII poll, is coming off a 3-2 loss to second-ranked Penn State. Zack Walz is the Hokies' top scoring threat with 10 goals and 13 assists (23 points) followed by Alex Smith (13 goals, 7 assists). Walker Detweiler has posted the majority of minutes in goal and sports a 7-6-1 record with a 3.02 GAA and an 89 save percentage.

All-time series: This will be Liberty's first meeting against West Virginia in at least six seasons. The DI Flames are 6-0 against Virginia Tech's DII team.

Coaches: Kirk Handy is in his 13th season as the Flames' head coach, with an overall record of 273-118-13. Zach Eckman is in his first season as West Virginia's head coach after playing forward for the Mountaineers from 2005 through 2009. Joe Mullen, nephew of the NHL Hall of Famer by the same name, is in his second season as Virginia Tech's head coach. He led the Hokies to the ACHA DII National Tournament for the first time last year and now holds a record of 26-18-4.