Perkins climbs to sixth at World University Games in Slovakia 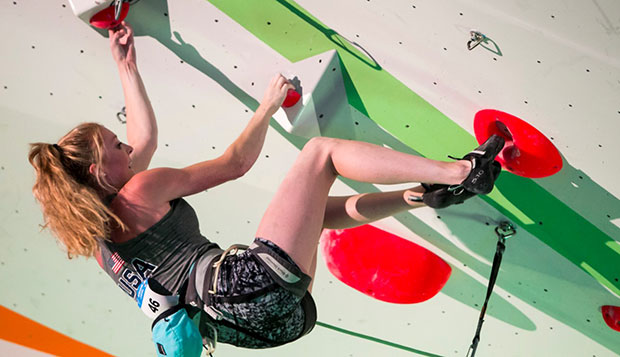 "I've been to three youth international climbing competitions, but this was my first time at a collegiate world championships," Perkins said after returning to her home in Atlanta. "I was so grateful and honored to be able to compete there and that Liberty made it possible for me. I went in without many expectations except to train hard, do my best, and have fun with it. It was an amazing experience to climb with super strong athletes from around the world."

Perkins was the only American to advance to the women's sport climbing finals, which featured four climbers from France, two from Japan, and one from host Slovakia. She was one of seven top-10 finishers — including women's bouldering champion Megan Lynch from Maryland — out of 21 men's and women's competitors from colleges and universities throughout the United States.

"It was a good group and we had so much fun," Perkins said. "I don't think there were many other Christians on the trip so it was great to be able to shine a light to whoever I was able to interact with and to bless others around me. Everyone was super encouraging and the U.S. team spirit was incredible."

The two qualifying rounds featured a flash format which gave climbers an opportunity to see ways competitors sequenced two different routes before their official climb attempts. Perkins finished in a three-way tie for sixth place after her two qualifying climbs, making the finals cut out of a total of 48 competitors, including four other Americans.

For the finals, climbers had six minutes to preview the route before being allotted six minutes to complete their lone climb attempt. Perkins made 32 successful moves along the route to finish tied for sixth — behind Japan's Mei Kotake (who won with 45 moves) and the four French climbers.

"The finals route was tricky to figure out because it had a lot of different angles and a mix of overhang and vertical and slab with inverted angles," Perkins said. "I was able to read the route with some of the other competitors, who could share data back and forth. The hardest part for me was the European holds were a lot different than the regular holds I was used to."

She hopes to return to the 2020 World University Games, which will be held in France, following her senior year at Liberty. After placing second in the women's sport division as Liberty's first competitor in the USA Climbing Collegiate Nationals in Texas in April, she anticipates teammates joining her for future national and world competitions.

"Our team just finished its second year as a Club Sports program, but it is really growing, and getting stronger and stronger," Perkins said.