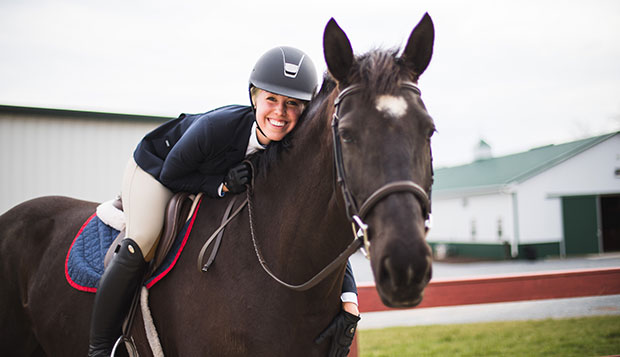 Kendall Burdette, a rising senior captain on Liberty's Hunt Seat equestrian team, has fallen in love with riding again since rededicating her life to the Lord. (Photos by Leah Seavers)

She says the spacious facilities — expanded in 2016 to add an indoor arena and a new barn — provide a sanctuary for fellowship with teammates and a place to commune with God on the horses they ride and to worship Him through the sport they love.

Burdette started riding at the age of 4, but quit the sport during her sophomore year of high school in a suburb of Baltimore.

"At the end of the day we know that riding isn't the be-all, end-all," said Burdette, who is studying Spanish with a minor in global studies. "Riding and competing is our platform and how the Lord chooses to glorify Himself through us."

"Even though riding was my identity, I was really unhappy and I felt empty," she said. "During my hiatus from riding, I came to know and love Christ. When I quit I said I was done for good, but the Lord had different plans."

After rededicating her life to the Lord during Spiritual Emphasis Week her freshman year, Burdette was convinced to try out for Liberty's equestrian team and developed a renewed passion for the sport.

"Ever since I came to Liberty, I've really come to learn what a relationship with Jesus looks like," Burdette said. "It's a daily pursuit. We wake up every day and have the privilege to commune with and abide in the Lord. We're going to fall sometimes and we're not perfect, but the Lord's grace and steadfast love carries us and pursues us as we strive toward His holy calling."

Burdette serves as a captain on the Hunt Seat team and won the Intermediate Flat division of the Region 4 Championships — hosted by Liberty for the first time in late February — to advance with three teammates to the Zone 4 Show in Greensboro, N.C., in early April.

"The success we have had is just a testament to the coaching, the staff, and the team that we have, but most of all, it's a testament to the Lord," said Burdette, who is working as a youth summer intern for Faith Bible Church in Houston, where she has continued to ride in preparation for her senior season. "None of this is possible without Him. Success is fleeting, but the provision of the Lord is eternal. He gives us this opportunity and we take it and we run. But we don't run alone. We run knowing that God is in front of us, He's behind us, and He's next to us."

""It's not just about building a team here," Burdette said. "But when we go out, how are we representing Christ? I always say one of the best ways and most effective ways to show people Jesus is to live like Him. If we're living like Him, they see a small picture and just get a taste of who Jesus is."

Since her recommitting her life to Christ, Burdette has developed a heart to witness to her father who was paralyzed after being hit by a car while cycling more than 10 years before she was born.

"Throughout my life, my dad and I have experienced our fair share of challenges, but he has been my biggest cheerleader, especially with sporting events," Burdette said. "Growing up, he was not God-centered in many ways, but I have witnessed some incredible transformations in him recently. He loves horses more than anything and when I finally came back to riding, he was so excited and ever since, I've seen his heart be softened continually. Now we have an amazing relationship and I'm seeing the Lord work in his life. Slowly but surely, Jesus is revealing Himself to him and it is a privilege to be a part of this journey."