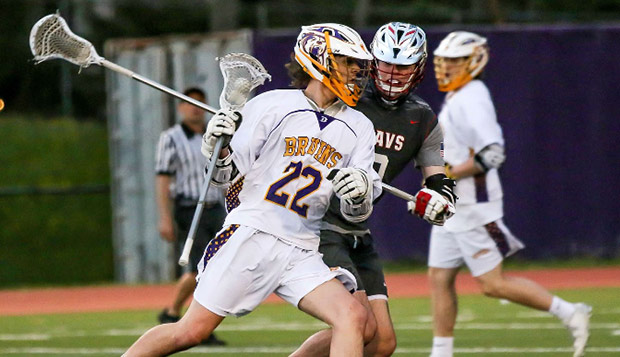 Before making his first official visit to Liberty University, Cooper Branham, an incoming men's lacrosse attackman from Burke, Va., made an early impression on Flames Assistant Coach Brett Bernardo prior to his freshman season at Lake Braddock High School in the summer of 2014.

Bernardo, then a rising junior midfielder for the Flames, was working at a Fellowship of Christian Athletes (FCA) summer camp at Gettysburg (Pa.) College and took Branham under his wing.

"I was a huddle leader at the camp and Cooper was in my huddle," Bernardo said. "He was really young at the time, but he was a great kid then and I continued seeing him at the FCA camps I worked. He grew as a player and I built a solid relationship with him over the past couple years."

This past fall, Branham attended Liberty's recruiting showcase on Nov. 11, when Bernardo and the rest of the Flames' coaching staff got a glimpse of his potential as a player and gave him an inside look at what the program had to offer.

Branham, who was also recruited by JMU and South Carolina, became Liberty's third commitment of the Class of 2022 this spring. Bernardo is looking forward to witnessing his continued development as a player firsthand.

"He will have to prove himself, but he had a great high school career and I am fully confident in his abilities as a player," Bernardo said. "We visited him this past season and he showed great potential and talent. I could definitely see him fitting in with the squad."

After growing up swimming and playing basketball and soccer, Branham developed his physical toughness through the contact sports of football, which he played through his freshman year, and ice hockey, playing left wing for his high school team the past two seasons.

"My dad played hockey, so I had grown up skating, but I have better quickness on the field than on the ice," Branham said. "Hockey helped me with my vision on the field."

At 6-feet, 2-inches tall, 180 pounds, Branham has a penchant for dodging his way from the X into the crease and finishing from close range or setting up teammates for point-blank scores.

"We are hoping he can come in and make an impact early on," Flames Head Coach Kyle McQuillan said.

Branham, who plans to major in Business Marketing at Liberty and would like to work in promoting a professional sports franchise. He is serving as an assistant coach with his Top Caliber travel team this summer.