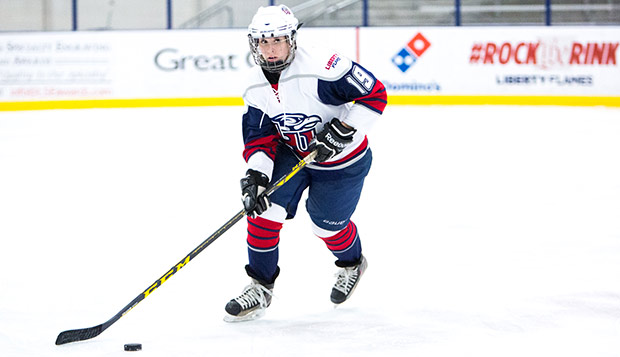 Grace LaPorte skates the puck up the LaHaye Ice Center ice in a Feb. 3 game against Maryland. (Photo by Andrew Snyder)

Grace LaPorte, a rising junior defenseman from Guilford, Vt., did not come to Liberty University to play on its ACHA Division II women's hockey team. Rather, she applied to pursue a degree through the School of Nursing.

Unlike her younger sister, Sarah, a rising sophomore defenseman for the Lady Flames who has played the sport since third grade, Grace didn't begin her hockey career until her sophomore year in high school.

"I was kind of in denial, because everybody in my family played hockey and I was like, ‘I'm going to be better at something else,' but then … I played hockey and I was good at it," she said. "The summer before my freshman year, I heard that the women's DII team was looking for players and … I contacted (Head Coach) Sara (Niemi) and she gave me a spot on the team and I've been playing here ever since."

She has thrived on the team, solidifying a defensive corps that allowed only 35 goals in 15 games this past season, helping the Lady Flames (12-4-1) qualify for the College Hockey East playoffs and ACHA DII National Championships for the first time in the program's history. And she has enjoyed the camaraderie the sport fosters, especially competing alongside teammates of like faith.

"It's different playing in a Christian environment versus a non-Christian environment just because you kind of feel like you can share every aspect of your life with your teammates and you can be close with them on every level," LaPorte said. "It's nice to have encouragement in the sport you love and then in school and also in your faith."