Ski and snowboard team building up base, making tracks 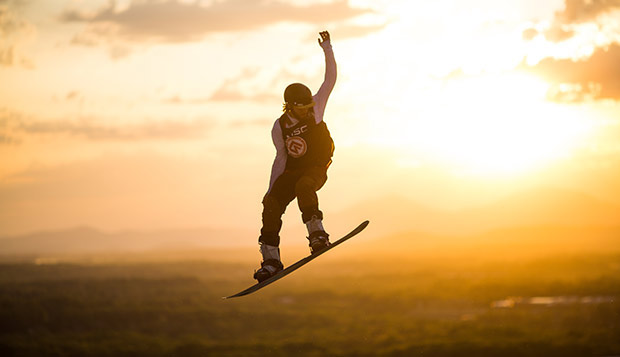 Though the majority of its roster was new this past season, Liberty University's ski & snowboard team landed on the podium for the fifth consecutive year with third-place showings in both men's snowboarding Slopestyle and men's skiing Rail Jam at the United States Collegiate Ski & Snowboard Association (USCSA) National Championships.

"Coming into this season as a really young team and as a new head coach myself … it was really awesome to look at the team progress throughout the season, both in their skiing and snowboarding skills and also in the relationships that we have on the team — seeing that team bonding and everybody getting closer together and being so encouraging to one another," said Isaac Gibson, who took the reins from former Head Coach Ryan Leeds to start the spring semester.

"We had guys on the team this year that had little to no experience in freestyle riding before they came to the school and to see how much progression they were able to build in six months was incredible," Gibson said. "I'm so excited to see this next year what they are able to add onto that. If our guys are able to stay healthy and continue with their progression … in the next three years, we could have one of the best teams that we have ever seen at Liberty … and hopefully be able to even take a national title."

Leeds and his family will move to Summit County, Colo., where he will serve as director of development for Skiers & Snowboarders For Christ (SFC), with Gibson continuing to lead the Lynchburg chapter of that ministry.

"We are already pretty connected with the guys out there in Colorado, where the national and international directors are based, but having Ryan out there will help give us even more direct contact," Gibson said. There are 37 SFC chapters across the United States and another 20 around the world.

Gibson is currently preparing to host Liberty's Next Level Ski & Snowboard Camps, set for June 17-22 and June 24-29 (overnight) and July 9-13 (day), with several SFC coaches and counselors coming to assist.

After being closed the past two weeks, the Liberty Mountain Snowflex Centre will re-open this Saturday with Family Fun Fridays set for 3-9 p.m. June 8 and Aug. 3. Those dates will feature bounce houses and food trucks as well as $5 all-access passes to the slopes, tubing runs, and aerial awareness trampoline.