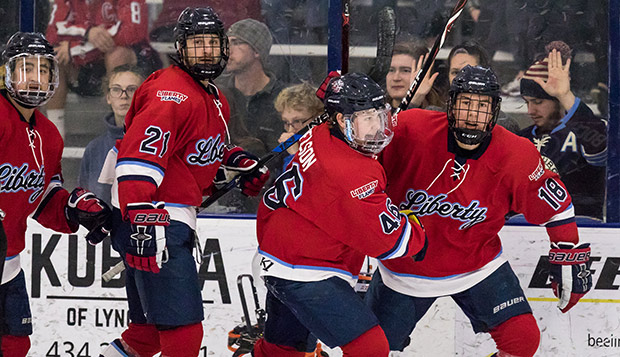 The Flames are excited to defend their ESCHL regular-season and tournament titles and earn another ACHA DI nationals bid. (Photo by Joel Isimeme)

Liberty University's ACHA Division I men's hockey Head Coach Kirk Handy has scheduled two top-five opponents for the Flames' 2018-19 season, which opens Sept. 21 at the LaHaye Ice Center with a single game against Penn State. The schedule includes home and away series against defending ACHA DI national champion Adrian University, ranked No. 1 in the final poll, and a home series against No. 5 Ohio on Nov. 9-10.

"Our schedule is definitely challenging next season and that's fantastic," Handy said. "We're looking forward to the opportunity to play some new teams, specifically four games against Adrian, which we scheduled before they won the national championship."

The Flames will face the Bulldogs (33-1), who defeated Illinois in the March 13 ACHA DI National Championship to claim the Murdoch Cup, on Oct. 26-27 in Michigan and again Feb. 22-23 at home.

Liberty finished the 2017-18 season 30-6-1 and ranked No. 10 in the final ACHA DI poll after defending its Eastern States Collegiate Hockey League (ESCHL) Tournament title. The Flames season ended with an overtime loss to defending champion Central Oklahoma in the ACHA National Championships opener after a program-record 19-game winning streak.

The Flames return the majority of their roster this fall, when they will seek to defend their ESCHL regular-season and tournament titles, starting with an Oct. 5-6 series at Delaware. Liberty will play 22 of its 33 regular-season games against ESCHL opponents (including home dates against Syracuse (Oct. 12-13), New York (Oct. 19-20), Stony Brook (Nov. 2-3), Rhode Island (Dec. 7-8), and Delaware (Feb. 15-16).

The ESCHL, which expanded to eight teams last season with the additions of NYU and Syracuse, will revert to six teams in 2018-19 with Rutgers returning to the Northeast Collegiate Hockey League (NECHL) and West Chester joining the Eastern Collegiate Hockey Association (ECHA).

Besides Adrian and Ohio, the Flames will also host non-conference games against Indiana University of Pennsylvania (IUP) on Sept. 28-29, with the first game being a "Midnight Mayhem" matchup, before ending their regular season March 1-2 at home against Alabama.

Liberty will try to win its third ESCHL tournament title after securing the team's 11th bid to the ACHA National Championships in 13 seasons competing at the Division I level.

"We're super excited for that opportunity, something that's going to be at the forefront of our goal-setting this year," Handy said.

Due to the ACHA's representation in the Winter World University Games, set for March 2-12, 2019, in Almaty, Kazakhstan, the ESCHL tournament will be pushed back to March 15-17 in West Chester, Pa. The ACHA DI National Championships are set for March 21-26 in Dallas, site of all five ACHA tournaments (DI, II, and III men's and DI and II women's) for 2019 and 2020.