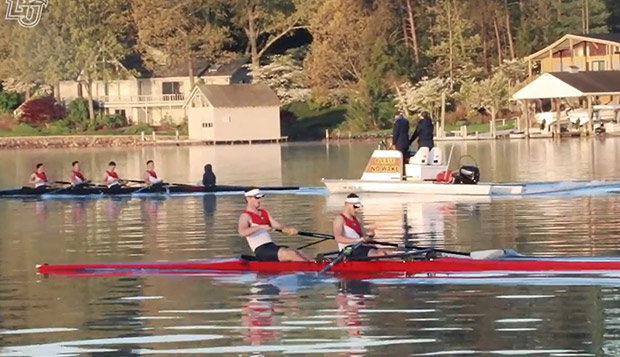 Liberty University's men's and women's crew teams will enter a Men's Novice 4, Men's Double, and Men's Single, as well as a Women's Novice 4 boat into this Saturday's and Sunday's American Collegiate Rowing Association (ACRA) Club Championships at Lake Lanier in Gainesville, Ga., site of the rowing events at the 1996 Summer Olympics.

The four boats will enter their respective 2,000-meter races at the national regatta for club programs with a full head of steam after competing at the Southern Intercollegiate Rowing Association (SIRA) Championships in Chattanooga, Tenn., last month.

"It's definitely a blast being at nationals and getting an opportunity to compete against these big-name schools," said senior Dave Jensen, who rowed with freshman Mike Pryor to a third-place finish in the Men's Doubles at SIRAs. "It's nerve-wracking at first … but then you start racing and the nerves settle and you just have fun with it."

The rowers have maintained their strength and conditioning on the water at Smith Mountain Lake under supervision from Head Coach Debbie Prowse.

"A lot of training goes into preparing for nationals," said sophomore rower Ryan Krupansky, who finished fourth in the Men's Single at the SIRA Championships. "It all comes down to: how long can you last? What is your strength endurance? How well can you work with your team in such an intense race? You have to stay super composed."

"It is very exciting, especially for novices that haven't been to (national) regattas before," Prowse added. "When you're lining up and you've got six other boats next to you, you've got officials and people on their megaphones talking to you, it can really be a distraction. Being able to focus and not let that excitement get the best of you is a real challenge."