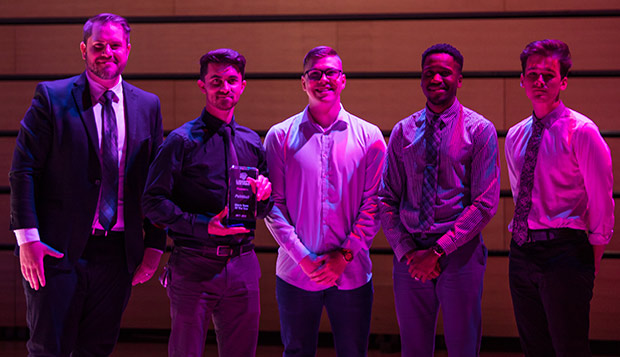 Game On anchor and Choice Awards host Rett McGibbon (left), with coaches and players from Liberty's paintball team, the Club Sports Men's Team of the Year. (Photos by Joel Isimeme)

"Getting the athletes together and building that unity and camaraderie really helped to make this event such a success," said Kaycee Tripp, Club Sports' assistant director of recruiting and special events, who coordinated the affair. "All the athletes who came … were able to spend the night with their team and celebrate their accomplishments over the year."

In the 2017-18 school year, 34 of the 41 Club Sports teams were represented at national competitions around the United States (18 out of 22 men's and 16 out of 19 women's), claiming three men's team (in archery, paintball, and wrestling) and two men's individual national championships as well as two women's team titles (Division I women's hockey and disc golf) and two women's individual national titles.

Liberty's ACHA Division I women's hockey team, which was ranked No. 1 for all but one ACHA DI poll and defeated No. 2 Adrian for its second national title in four seasons, was named the Women's Team of the Year and the paintball team, which claimed its first National Collegiate Paintball Association (NCPA) Class A championship, was honored as Men's Team of the Year.

Junior gymnast Julie Bouton, who finished second in the Level 9 All Around competition at the National Association of Intercollegiate Gymnastics Clubs (NAIGC) Championships, was awarded Female Athlete of the Year.

Senior wrestler Austin Amos, whose last-second reversal in the 235-pound championship match lifted the Flames to their second National Collegiate Wrestling Association (NCWA) national championship in four years, was honored as Male Athlete of the Year.

The women's disc golf team, which won the championship flight of the National Collegiate Disc Golf tournament for the first time in April, was given the Breakthrough Award.

Heath Grishaw, who served as Head Coach Parker Spencer's assistant for the Flames' first-year men's swimming & diving team, was honored as Assistant Coach of the Year.

Tori Perkins, who was the first member of the second-year rock climbing team to compete in the USA Climbing Collegiate National Championships and placed second in the women's sport division, was named Club Sports Rookie of the Year.

Karis Hicks, a captain on the ACHA Division II women's hockey team, earned the Club Sports Champion Award, given to the senior student-athlete who has demonstrated commitment and service to their team through athletic, academic, and leadership performance. Hicks was named the ACHA DII off-ice MVP after helping to lead the Lady Flames to their first postseason appearances in both the College Hockey East (CHE) and ACHA DII National Championships.

Liberty sophomore figure skater Jill Holste, who was diagnosed last fall with ventricular tachycardia, received the Perseverance Award. The condition, which causes a rapid heartbeat and prevented her from performing her long or short Novice freestyle programs, forced her to switch to Preliminary ice dancing so she could continue to compete for the Lady Flames. She placed in the top five in all three of her Eastern Sectional events.

Erin Duffy won the Student Service Award for her service as team manager with the Flames' ACHA Division II men's hockey and Lady Flames' DI women's hockey teams over the past two years.

Mark Chauvette, a graduate engineering student on the rock climbing team who is one of 15 Club Sports student-athletes to maintain a 4.0 grade-point average, earned the Academic Athlete of the Year award.