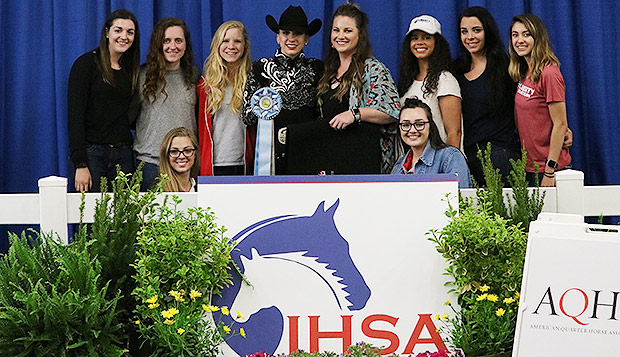 Mays' Novice Horsemanship division was the final event on Sunday afternoon in a competition that lasted only 30 minutes with no finals. Each of the riders guided their horses along the rails before having them perform a required pattern.

"It was a great experience," Western Coach Lauren Eagles said. "Erin drew a pretty difficult horse, so it took her a minute to figure her out. She's improved so much this year and I'm proud of her."

Mays, who arrived with several of her teammates on Friday, had additional support from family and friends in town leading up to Sunday's performance.

Eagles hopes Liberty's Western riders can build on Mays' success and advance to nationals as a team next season, their fifth with a Western team, when they should be even stronger.

"We have a couple really nice recruits coming in that have a good foundation and background to join several returners who made big improvements and will improve on that success next year as well," Eagles said. "The team's goal next year is to win our region and finish in the top three in our Semi-Finals, which will qualify the whole team for nationals, as well as having more individual riders compete."