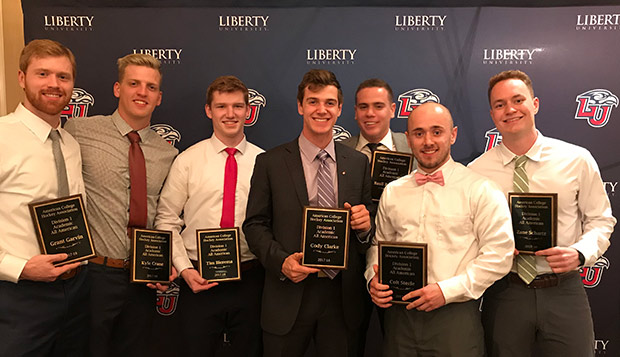 Following one of its most successful seasons as a program, Liberty University's ACHA Division I men's hockey team honored its outstanding student-athletes during last Thursday's end-of-the-year banquet.

The Flames (30-7), who advanced to the ACHA DI National Championships for the 10th time in the 12 seasons they have competed at the Division I level, selected senior forward Grant Garvin and junior goalie Cole Burack as its co-Most Valuable Players.

Garvin, who signed to play with the Roanoke Rail Yard Dawgs in the Southern Professional Hockey League (SPHL), led all ACHA Division I players in scoring with 25 goals and 49 assists, pacing the Flames in points (74) for a third consecutive season. He was also tabbed as Liberty's Forward of the Year.

Burack emerged as Liberty's No. 1 goalie and finished with a 20-4 record with five shutouts, a 1.83 goals-against average, and a 93.1 save percentage.

Freshman forward Cole Gammer, who scored the game-tying goal in a 2-1 loss to defending champion Central Oklahoma in the first round of nationals, was named the Flames' Rookie of the Year after ranking fifth on the team in scoring (15G, 31A).

Junior assistant captain Zane Schartz, who joined the Norfolk Admirals of the East Coast Hockey League (ECHL) two days after returning from nationals, was designated the Flames' defensive player of the year.

Sophomore forwards Brock Thompson and Victor Blomberg shared the honor of Most Improved Player with Blomberg also earning the title of Hardest Worker.

Head Coach Kirk Handy, who recorded the 400th win of his 18-year career at the helm of the Flames, said a benedictory prayer at the end of the banquet, sending out the three graduating seniors (Garvin, Steele, and Bierema) as well as Schartz.