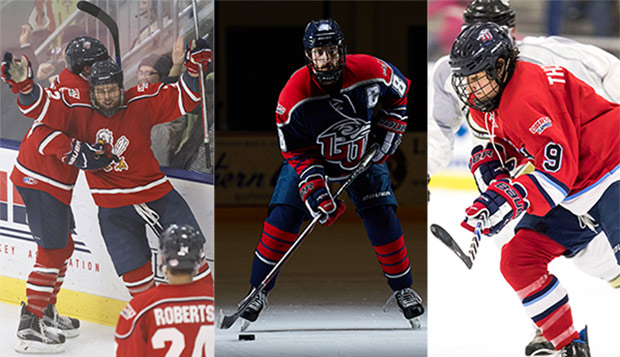 "They work really hard and that's what I'm all about," said Hamilton, who is pursuing a business degree with a focus on project management. "I love the way Zak plays. He brings a physical aspect to the line and he is a great guy in the locker room. He is very vocal and all the guys like and respect him. Brock is a serious guy and knows what the guys need to do to get in shape and work hard. It's going to be another great year and it's going to be really fun. I'm ready to come back and get after it."

Thompson, who is studying strategic communication, realizes the leadership responsibility his new role brings and is ready to accept the challenge.

"Grant and Zane were great players and they are going to be tough shoes to fill, but this team is moving on an upward trend every year and that's the goal, to continue that," said Thompson, who was tied with sophomore linemate Quinn Ryan for third on the team in scoring with 49 point (23 goals, 26 assists), behind Garvin, the Flames' points leader for three straight seasons, and Schartz. "It doesn't matter at the end of the day who puts the puck in the net. We have a great corps of guys that are going to step up with all four lines contributing toward the end goal."

Hayes formerly played on Hamilton's line and looks forward to serving alongside him as captain.

"When Josh came in as a freshman, I had a chance to play almost that whole season on his line and his work ethic and how he carries and conducts himself on the ice was great to watch," Hayes said. "We have a tremendous group of guys on this team and it is an honor to be named an alternate captain going into my senior year, when I will have one last shot at being part of a national championship."

With the majority of the team returning and only a few new recruits likely to be added to the mix, Hayes expects a smooth transition for the Flames, who will seek to defend their ESCHL regular-season and tournament championships.

"The chemistry's already been established, so we can hit the ground running when we return for the fall," he said. "Now, it's a matter of having the will to work and getting the job done."