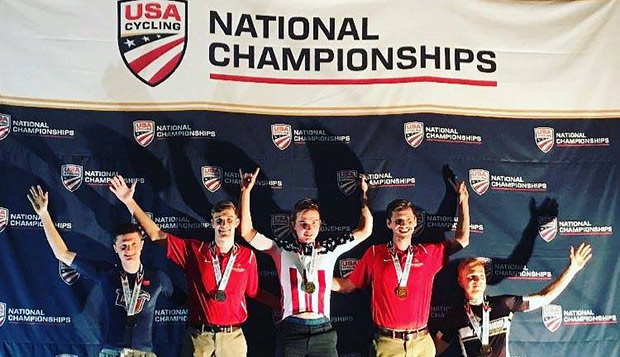 Flames senior Jake King (left) made a podium appearance after finishing fourth in the individual time trial on May 5 near Grand Junction, Colo.

King, who finished fourth in the 2016 road race near Asheville, N.C., recovered from a disappointing performance on Friday's 106-kilometer to place fourth out of 11 competitors in Saturday's 23.8K men's collegiate Division II individual time trial in a time of 34 minutes, 15.99 seconds. He did not finish Friday's road race or Sunday's criterium held in downtown Grand Junction.

She then placed seventh out of nine competitors in Saturday's women's Division II individual time trial in 44:16.71 before not completing the women's criterium.

On Friday at 9 a.m. (CST), Parker will compete in the three-lap, 80-kilometer women's road race starting and ending in Purdy Mesa, Colo., before King races in the four-lap, 106K men's road race at 1 p.m. He finished fourth in the 2016 Collegiate Nationals road race near Asheville, N.C.

Parker will then enter Saturday's 9 a.m. 30.3K and noon 23.8K individual time trials starting and ending in De Beque, Colo., with King to race in the same distance men's individual time trials that follow. On Sunday, Parker and King will compete in the 70- and 80-minute collegiate men's and women's criterium races in downtown Grand Junction. The complete schedule is available online.

Flames Head Coach Parker Spencer expects King, a Liberty online student from Charlottesville, Va., and Parker to represent Liberty well at the national level, especially in the road and criterium races, which are both draft-legal.

"Sarah had a successful season, finishing second in the B category of the Atlantic Collegiate Cycling Conference (ACCC) before moving up to the A category and placing in the top five," he said. "Jake has had a ton of success in the sport and his fitness has continued to improve. He has hit all of his goals and he going into this very confident and in great shape. He is motivated to contend for a national title."

Spencer said cyclists from Colorado schools will be favorites, especially in their home state with elevation close to 5,000 feet.

"Part of it is the culture, and also the altitude adjustment," he said. "The harder (road race) course is going to help (King) because he has trained for it. The criterium is on a simple course, but it is still technical with 90-degree turns. As long as he positions himself well, he will fare very well."

While Phillips, Parker, and King are in Colorado, Spencer will be in St. George, Utah, to support freshman triathlete Giavanni Bianco as he competes in Saturday's Ironman 70.3-mile North American Pro Championships, a qualifier for the Sept. 1-2 Ironman 70.3 World Championships in South Africa. He will then fly overnight to Richmond, Va., to arrive in time to watch sophomore Thomas Sonnery-Cottet compete in the ITU CAMTRI American Cup, which serves as the U23 National Championships.