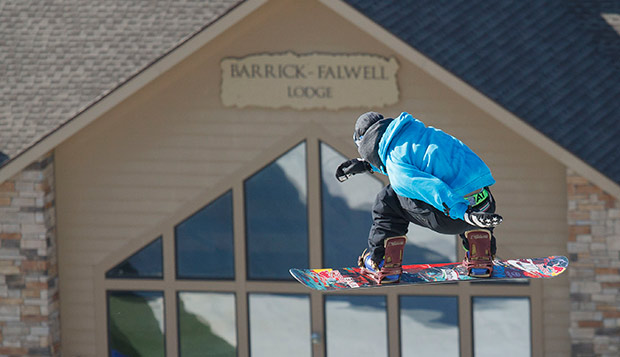 "It should be good, the biggest competition we have held since the Snowflex Games," LMSC General Manager Ryan Leeds said of the event last held in 2015. "It is open to anyone and everyone, with men's, women's, and youth skiing and snowboarding divisions."

On-site registration of $10 per contest (which includes a day pass on the slopes) will open in the morning and the event will offer first-, second-, and third-place prizes of $750, $400, and $150, respectively, in the Big Air and Rail Jam open events. Skiers and snowboard riders will be judged on overall impression in the Big Air jumps and on their best two of five Rail Jam runs.

Spectators are admitted for free or can purchase a $10 all-access pass for skiing, snowboarding, tubing, and trampoline use from 3-10 p.m.  Entertainment will include a live performance by The Dundies and a corn hole tournament, with both starting between 7:30-8 p.m. after the awards presentations.

There will be a variety of food trucks set up on location after 4 p.m.

"We want students and the community to come out to an event that we are trying to make exciting and unique," said Liberty ski & snowboard Head Coach Isaac Gibson, who expects the majority of his team to compete along with some of the region's top amateur riders. "It is a huge recruiting opportunity."