No. 1 ranked Lady Flames shut out Miami of Ohio twice 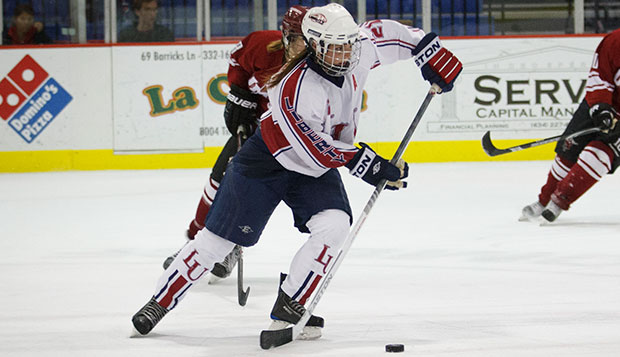 Liberty University's Division I women's hockey team, ranked No. 1 in the ACHA since November, padded its top billing with two shutout victories at Miami of Ohio's Goggin Ice Arena over the past two nights.

The Lady Flames (19-1 overall, 16-1 ACHA) outshot the RedHawks 35-20 in a 5-0 triumph on Friday with sophomore goalie Samantha Rupp posting the shutout. Then on Saturday, Chantal Lischynski, in her first full game since returning from a torn ACL injury in her knee, saved all 18 of Miami's shots in a dramatic 1-0 win.

"It was a battle," Liberty head coach Paul Bloomfield said. "We outshot them 36-18 tonight, we pounded them. We just didn't get it in the net.

"They came back and they were better tonight. Penalties were hurting us. We still outplayed them."

With three minutes left in the third period, Carly Peleshok capitalized on a line change to score the game's only goal off a lead assist from fellow 5-foot-4 senior Ontario native Laura Del Monte.

"We just got a chance to break out of our end and Carly got out of the red line and took a long pass from Laura," Bloomfield said. "She's a very fast skater and she powered her way through one-on-one. She went straight in and put it underneath her glove and over her pad."

Until that point, it appeared overtime was inevitable.

"We figured we were ending up there," Bloomfield said.

However, Peleshok's substitution was timed perfectly and she put the series sweep on ice.

"Normally, (Peleshok and Del Monte) don't work on the same line, but it was in the middle of a line change," Bloomfield said. "When we changed lines, the girls jumped off the bench and Carly got behind their defense. They (had the puck) in our zone, she came out behind them and Laura spotted her down the ice. She was already ahead of them so their defense couldn't catch her. She's very fast and her shot's very quick."

Four players got into the scoring column on Friday, with Carrie Jickling putting the Lady Flames in front to stay in the first period. Amanda Grainger netted the first of her two goals in the second before Sarah Stevenson extended Liberty's lead to 3-0 early in the third. Grainger tallied again before Stacey McCombe, wife of Division I men's team standout Andrew McCombe, capped the scoring.

"It was awesome," Bloomfield said. "It was imperative that we come back with two wins to stay in first place. It was really good that both goalies got shutouts. That's good encouragement and good for their confidence."

After returning to Lynchburg early this morning following their nine-hour bus trip from Ohio, the Lady Flames will gear up for a trip to Chicago next Thursday for back-to-back games against Robert Morris, the No. 3-ranked team, on Friday and Saturday.