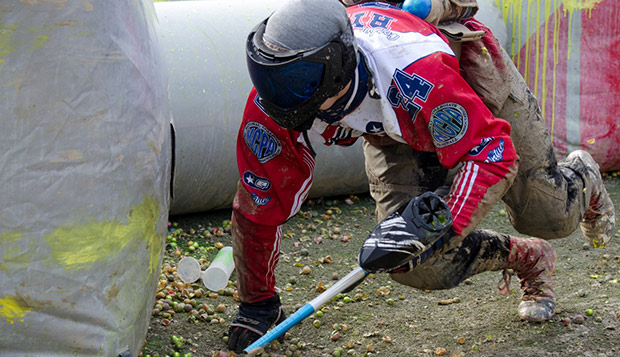 The Flames' Gold line returned to the Final Four of the 13-team Class A bracket with an 8-4 triumph over Penn State and will face Florida Atlantic, the team that eliminated it last year, in a 10 a.m. semifinal rematch. FAU rallied from a 2-0 deficit to top Liberty 6-4 in Friday's opening match.

The winners of Sunday's showdown between the Flames and Owls and the 11 a.m. semifinal match between Central Florida and Connecticut will square off in the 1:30 p.m. championship.

Complete results and updated schedule information is available online and championship matches will be streamed live on PBNation's YouTube Channel.

The Flames opened a 2-0 lead on FAU, which eliminated them in the semifinals of last year's tournament, and led 3-2 at the half.

"There were some good lessons there," Liberty Head Coach Brian Davidson said. "They were beating us to positions and outplaying us on the snakeside of the field and getting up the field quicker. Now we know what it takes to beat them and if we face them again in the final, we'll be ready. If we can figure out how to stop their heavy snakeside aggression, we should be able to stop them."

Playing in temperatures that topped out around 80 degrees, the Flames recuperated to dominate Drexel, 7-1, before putting the mercy rule into effect against Akron, winning 8-0 in a game shortened by seven minutes in the second half.

"We've figured out how the layout plays and applied some great presses and it's been paying off," Davidson said. "We were definitely playing our A game. If we can continue to play with that intensity and pace, we have a chance to win this tournament."

"Among our Gold line players, Kyle Babb and Brandt Jones were pushing the field really well and getting the kills they needed," Davidson said.

FAU defeated Central Florida, the other top-seeded team in the tournament, 7-4.

The Flames (7-2) will face the winner of Saturday's Ochos round match between Purdue and Penn State at 5 p.m., with the winner advancing to Sunday's 10 and 11 a.m. semifinals. Liberty's three Class AA lines open pool play competition Saturday, with defending champion South Florida the favorite in that 27-team field.

A complete schedule with live results is available online and the tournament is being streamed live throughout the day on the NCPAPaintball YouTube Channel.