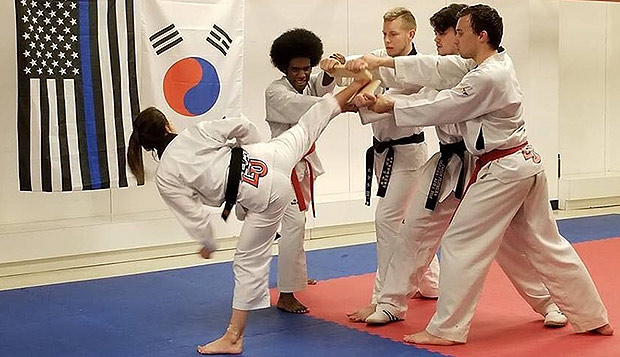 Senior Sadie Newton breaks a board held by teammates and assistants during testing for her 4th Dan black belt promotion.

Three members of Liberty University's taekwondo team successfully tested for their black belt promotions in front of a formal board, Saturday at the Flames' training facility in River Ridge Mall.

Fujimura's son, Jacob Fujimura, a 3rd Dan black belt, assisted by serving as a sparring partner and board holder for the breaking test.

"They were tested in forms, self-defense, breaking, and fighting," Liberty Head Coach Tom Childress said. "Each candidate had to submit a 10-page paper that showed their proficiency in the philosophy and history of taekwondo."

Newton, who has served as a team assistant for Childress over the past two years, is now one of Liberty's highest-ranked black belts on a scale that goes up to 10th Dan. For her 4th Dan promotion, which earned her the title of Master, she needed a professor's recommendation attesting to her character and study habits.

"When you get to a certain level, they're not just looking at physical abilities, but also your ability to teach others and to be an example in the taekwondo community and the community at-large," Childress said. "They really want to make sure that when you earn that title that you are a true representation of the martial spirit, the embodiment of martial arts as a whole — that you have good moral character, put others before yourself, and make good decisions. They care more about who you are and what you can give back to your community — that you are an example for everyone, much like being a Christian, which almost goes hand in hand."