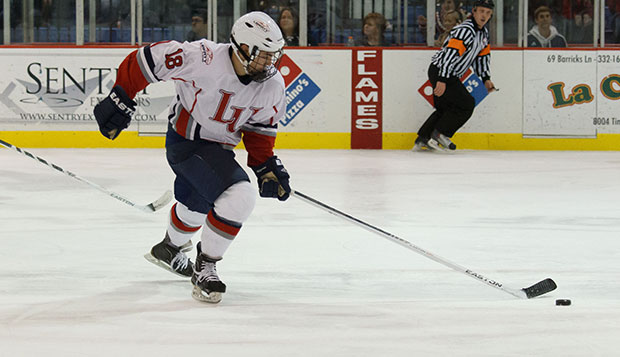 A night after dropping an agonizing 4-3 shootout loss at Arizona State, the ACHA's top-ranked Division I team, the 10th-ranked Liberty Flames staged an astonishing 7-6 come-from-behind triumph in the first of two games at Arizona, Friday night before 1,350 fans at the Tucson Convention Center.

The 18th-ranked Wildcats, who were riding into the new year on a five-game winning streak, all on their home ice, lost for the third straight time in Tucson after holding a two-goal lead, this time in the third period.

"We were down 5-2 and we scored five goals in the third period," Liberty head coach Kirk Handy said, noting it was his team's biggest third-period production of the season.

The Flames (15-9-2) had rallied from a 3-0 deficit to force overtime Thursday at ASU before losing in an eight-round shootout.

"We were down by three goals again, which isn't ideal, but we were able to battle back and work our way back in the game," Handy said. "For the first two periods, we did not play well at all. We let them dictate the way the game was played. (In the third) we were working a lot harder and a lot smarter and the bounces were starting to go our way."

He said the turning point was the first of two third-period goals by Ryley Egan, trimming the Wildcats' advantage to 5-3 at the 17-minute mark.

"That was 24 seconds after they scored," Handy said. "We were looking dead in the water and it got us back on track. It was a 3-on-2 with Lindsay LeBlanc, Andrew McCombe, and Egan and LeBlanc went cross-ice to Egan who finished it off."

Following a second goal by Brent Boschman, who had opened the scoring, and the first of two goals from Liberty's scoring leader Rick Turner (54 points), Egan struck again off assists from Matt Sherry and LeBlanc, giving the Flames their first lead since the first period, 6-5.

"Egan's first goal started the ball rolling," Handy said. "His second was the beginning of the end for them, with the momentum we were gaining after that."

Egan and McCombe recorded assists on the game-winner by Turner with 6:31 left in regulation.

Freshman Tyson Street also scored for Liberty, lifting the Flames to a 2-1 lead off the first of three assists from McCombe and Paul Ingles.

Liberty junior Blair Bennett and sophomore Clayton Brown split time in goal, combining for 30 saves as the Flames outshot Arizona 38-36 on the night.

Liberty improved to 3-0 all-time against the Wildcats after sweeping a two-game set in 2006. The Flames play a second game at Arizona Saturday night at 9:30 (EST) before hosting AU on Jan. 25 and 26.

"It just gives us the confidence," Handy said of the dramatic win. "Through adversity, you either grow closer together or fall farther apart. We chipped away and grew closer together as a team tonight."