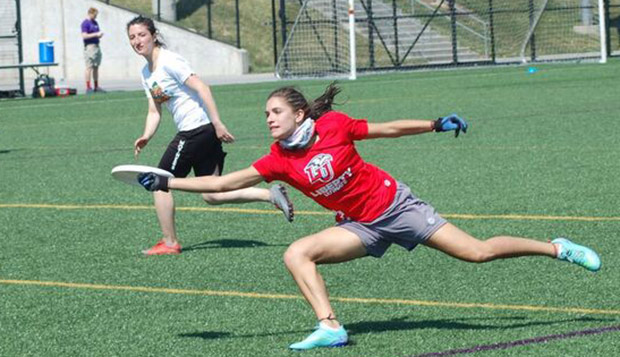 The two-day tournament was played in windy conditions, making it extremely challenging for teams playing into the wind to score.

"It was difficult playing in those conditions, but everybody adjusted well and we are excited to be going back to regionals," Liberty Head Coach Jonathan Mast said.

The tournament featured a seven-team pool with the top three teams clinching regional berths and the remaining four contending for the final two regional bids allotted to the conference.

The Lady Flames, ranked 143rd in the latest USA Ultimate women's poll, upset third-seeded William & Mary (No. 130), 7-5, to clinch third place. Liberty and the Tribe had split two matches in the regular season The Lady Flames regained possession and scored the game-winning goal on the only up-wind break of the contest.

"We had a good balance of scoring overall and I was very proud and pleased with how everybody played," Mast said. "With nine new players on the 14-player roster we had available, this is probably the fastest-developing group I have ever coached."

The Lady Flames will be seeded 11th or 12th for next weekend's regionals event. Liberty placed fifth at the past two season-ending tournaments, where only the top two teams advance to the May 25-28 USA Collegiate National Championships in Milwaukee.

"Anything can happen," Mast said. "We can make up for lack of experience with grit on defense."