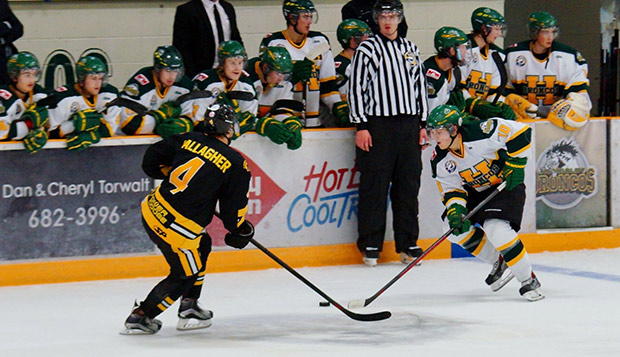 Liberty sophomore defenseman Josh Bergen (right) played for the Humboldt Junior 'A' Broncos from 2014-16 and flew to Saskatchewan with three teammates Wednesday for support.

Four members of Liberty University's ACHA Division I men's hockey team traveled to Canada on Wednesday morning to attend memorial services and comfort the families of survivors of last Friday's bus crash that killed 15 players and staff and injured 14 others from the Humboldt Broncos.

Sophomore defensemen Josh Bergen and Chayden Lauber and freshmen forwards Jordan Bochinski and Cole Gammer all had friends injured or killed in the tragedy. Bergen played for the Broncos before arriving at Liberty in August 2016. Gammer was close friends of the family of Stephen Wack, one of the 10 players killed.

"It was terrible and it affects all of us," Liberty DI men's Head Coach Kirk Handy said. "There's all kinds of connections in the hockey world. Their coach (Darcy Haugan) was the same age as I am, and he had young kids, too, so there's a connection there. For years and years, we have ridden buses to away events and hope someday this never would happen. And when it does, you want to rally around those involved."

At the start of Monday morning's Convocation in the Vines Center, Liberty Senior Vice President for Spiritual Development David Nasser led students in prayer for the families and friends dealing with the tragedy, including Liberty hockey players returning to their homeland this week.

"I can tell you they're not just going to mourn, they're also going to be salt and light," Nasser said. "I feel like we're sending (four) missionaries to go and be a shoulder to cry on, to go to weep, but also to hold hope and to dispense it to anyone who will listen."

Club Sports staff members set up 29 pinwheels outside the LIC as a makeshift memorial and painted Liberty's spirit rock on University Boulevard with a tribute to the victims.

On Tuesday afternoon, dozens of players from all five of Liberty's ACHA teams stopped by the LaHaye Ice Center (LIC) to pray for the Humboldt Bronco Hockey family and community, as well as the truck driver who survived the crash. They signed cards that the four Flames team members will deliver to families.

Nearly 60,000 people from close to 60 countries have helped raise more than $9 million through a GoFundMe account set up days after the accident.

The tragedy hit home with Club Sports Ministry Director Brian Davidson, who lost six friends including a teammate and co-captain from the Houghton (N.Y.) College men's soccer team when their car crashed into a tractor-trailer during his senior season in October 1981.

"That played a significant role in propelling me into full-time ministry because I realized tomorrow is not promised to me," said Davidson, who has conversed by text with the Broncos' team chaplain, Sean Brandow. "It's hard to convey the significance of the need to be urgent and zealous about living today for the Lord. I hope one of the redeeming factors that comes out of this is the guys here will embrace what we're trying to share as far as being missional. We hope to fill up that prayer circle at the end of the games with (opposing players), that they might see the reflection of Christ in us as the result of the way we play."

He said Liberty's Club Sports teams pray before they leave on the hundreds of road trips they take every school year.

"We talk about things like that, just praying for our safety, and we have to always remember to thank the Lord after we get back," Davidson said. "You just can never, ever take it for granted." 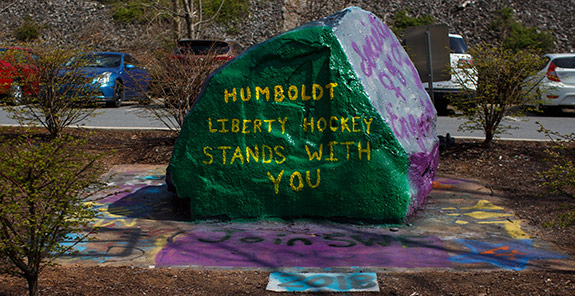