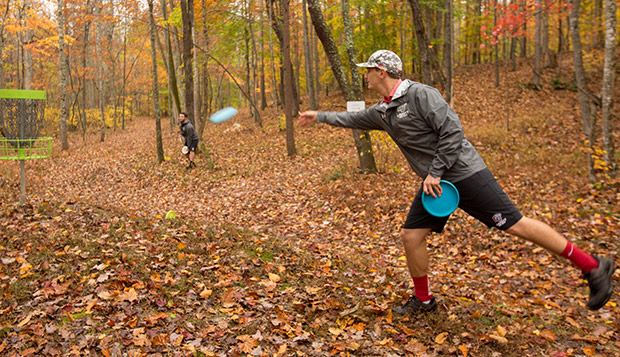 Juniors Ryan Shumate and Hunter Thomas, graduate Jeremy Miekley, and freshman Trevor Staub competed on the Flames' top-flight team, which totaled 273 shots to tie North Carolina State's foursome for first place after two rounds of regulation play. On the first hole of a tie-breaking playoff, Liberty got within five feet of the basket on its approach shot and sank the putt to clinch first place after the Wolfpack foursome missed its 50-foot putt.

Shumate and Thomas will be joined by junior Zach Biscardi and freshman Pete Curran to form the Flames' championship flight at the national tournament, where Liberty will compete for the seventh consecutive season after placing a team-high seventh in 2016 and slipping to 14th last spring, a rebuilding year.

"We have eight girls going and 12 guys, so it's the biggest team we have taken to nationals," Liberty Head Coach Steve Bowman said.

The championships will be held on only four of the six courses at the Hippodrome Disc Golf Complex this year, with the longest championship course currently closed to competition.

"The whole schedule's going to be different this year," Bowman said, noting that the Flames' top foursome teed off at 9 a.m. Wednesday and all flights will play five rounds of singles and doubles rather than six. "It plays to our advantage because we have practiced to the length of the longer course, so we should be better off with the shorter distances."

Temperatures, which are expected to be in the upper 70-degree range by Thursday and in the upper 80s by Saturday, could pose a challenge with the courses to be played featuring less shade.

Live scores will be posted throughout the four-day tournament, which concludes Saturday, on the Professional Disc Golf Association (PDGA) website.