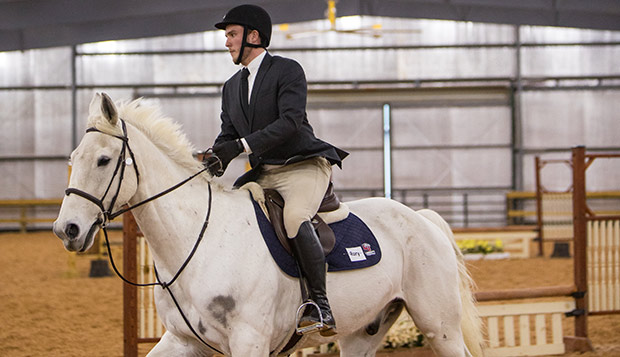 Though none of the four Liberty University Hunt Seat qualifiers for Saturday's Intercollegiate Horse Shows Association (IHSA) Zone 4 championships, Greensboro, N.C., advanced to next month's 51st IHSA National Championships in Harrisburg, Pa., Head Coach Suzanne Flaig was more than satisfied with their overall riding over the weekend and throughout the season.

"They all performed well in very good company," Flaig said, noting that only the top two points winners in each of eight classes of 10 riders made the nationals cut. "It was very strong competition and while they came up a little bit short, they showed improvement in their skills over time and should be proud of the work that got them to that level."

Senior Mary Claire Gill finished fourth in the Walk-Trot-Canter division while sophomore Amber Gayheart was fifth in Novice Flat and sixth in Intermediate Fences to pace the team.

Juniors Kendall Burdette and Ryan Wambolt placed ninth in the Intermediate Fences and in Walk-Trot classes.

"They had stiff competition and when they finished their performances and focused on what they did, I was proud of them both," Flaig said. "They didn't make any major mistakes and they represented Liberty very well. I was pleased that everybody received placings and that we had a few students very close to qualifying. Building for next year, it was a great experience for those students to be able to participate."

The show was held in a steady rain in an outdoor ring, but Flaig said that did not play a major factor.

"It wasn't ideal conditions, but everybody was in the same boat," she said. "It was a well-run show and the horses were agreeable. The host from Region 5 did a great job of putting those horses together."

St. Andrews (N.C.) was the overall team champion and will advance to nationals in both the Hunt Seat and Western riding disciplines. The Lady Flames already qualified their first individual Western rider to nationals, junior Erin Mays, who placed second in the Novice Horsemanship division at the March 18 Semi-Finals in Reedsville, W.Va.

Next season, Liberty will host another Region 4 show at its Equestrian Center in early February before traveling to Sweet Briar for the Region 4 Championships.