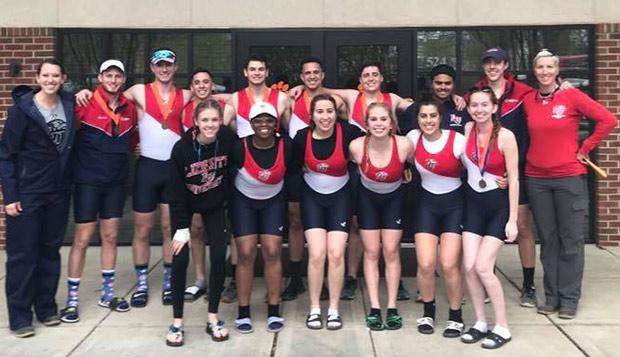 The Flames and Lady Flames rowers entered four boats who competed against several crews from southern colleges and universities that they will meet again in the April 21-22 SIRA Championships in Oak Ridge, Tenn., and the May 26-27 ACRA Championships in Gainesville, Ga.

"It was a really exciting race," Liberty Head Coach Debbie Prowse said. "They had a steering issue over the last 200 meters and got a little off course. That's probably the most unforgiving event because they don't have a coxswain to steer them and they each only have one oar. The key is being as synchronized as possible and pulling with the same power. They definitely have speed to gain and are looking to improve their technique," before Saturday's Rocketts Landing Regatta, hosted by VCU in Richmond, Va.

Liberty's Men's Novice 4, made up of juniors Cameron Anderson and Jeremy Damone, sophomores Isaac Cantor, Jacob Thomas, and freshman coxswain Sarah Nixon, advanced to the six-boat final by placing third in their five-boat heat. In the final, they placed in 7:56.6, behind only Clemson (7:17.5) and Wake Forest (7:52.6).

Liberty sophomore Ryan Krupansky earned a bronze medal in the Men's Single, clocking a time of 8:28.3 to edge out a rower from Auburn for third place in his four-boat final.

Last Thursday night, several crew team members volunteered to guide 14 newcomers to the sport in the first of four "Learn To Row" events this month out of Mitchell's Point Marina at Smith Mountain Lake, where Liberty's boathouse is based. Prowse welcomes more students to come out to the next three Thursday night rows to introduce them to the sport and potentially recruit them to join the team.