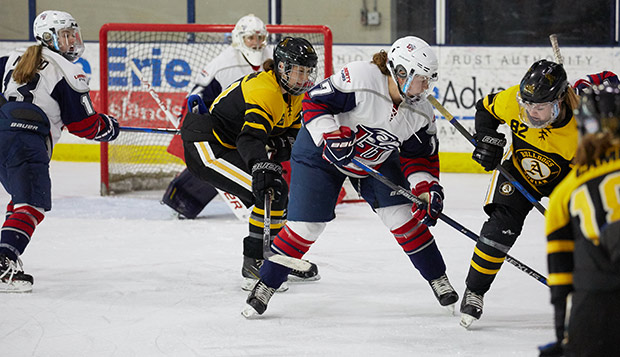 Liberty University's ACHA Division I women's hockey team was ranked No. 1 in the nation for all but one week throughout the 2017-18 season, which culminated in the Lady Flames (29-3) winning their second national championship in four years with a 2-1 triumph over second-ranked Adrian (28-3-1).

Liberty finished 27-1 against ACHA competition this season, including 21-0 away from the LaHaye Ice Center. The Lady Flames' only loss came in their first contest of the spring semester, on their home ice against No. 3 Michigan State, ending a program-record 19-game winning streak.

After slipping behind Adrian to No. 2 for the sixth ranking period, Liberty reclaimed the No. 1 spot from the Bulldogs in the regular season by beating them on Nov. 17, 4-1 in Michigan.

The rematch with Adrian in the ACHA final was the first national title for first-year Head Coach Chris Lowes, who led Liberty's ACHA DII men's hockey team to the championship game the past two seasons, and eighth-year Assistant Coach Justin Forth, who had taken the 2014-15 season off.

The Lady Flames became one of only six teams in the 18-year history of the ACHA DI Women's National Championship to claim multiple titles, trailing only Lindenwood (four) and Miami (Ohio) University (three).