Flames rise to No. 9 before Friday's 'Midnight Mayhem' match 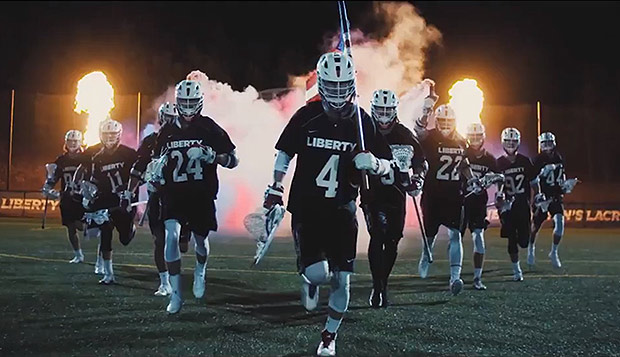 Liberty University men's lacrosse team's sixth annual "Midnight Mayhem" matchup will be webcast live for the first time on WatchESPN Friday, starting at 11:59 p.m., when the Flames face off against Pittsburgh at the Liberty Lacrosse Field.

"It's another good opportunity to represent Liberty and the SELC in front of a national audience," Flames Head Coach Kyle McQuillan said. "With it being the midnight game, it will be a great atmosphere to be able to play in."

Liberty (6-3), which moved up another spot to No. 9 in this week's seventh MCLA Division I rankings — ahead of No. 10 Virginia Tech (7-3) — will host the Hokies in next Friday's regular-season finale. That matchup will determine the No. 1 seed out of the Northwest Region for the April 20-22 SouthEastern Lacrosse Conference (SELC) Tournament near Atlanta.

"This is unchartered territory for us being in the top 10," McQuillan said. "It's definitely the highest we've been ranked at the Division I level. Every time we move up, it's exciting, but we're trying to stay focused on (Friday) night's game and next week's showdown with Virginia Tech."

His first priority is making sure the Flames avoid an upset at the hands of the unranked Panthers (4-5), a team Liberty defeated 16-11 in the teams' only previous meeting, March 21, 2015, in Pittsburgh.

All five of Pitt's losses this season have come against opponents ranked in the MCLA DI top 25 at the time — then-No. 5 Michigan State, No. 11 Connecticut, No. 12 Boston College, No. 23 Minnesota, and No. 25 Northeastern.

"The midnight game tends to bring the best out of whoever we play," McQuillan said. "We will have the home field advantage, but we can't discount them. We expect to get their best punch, so we have to be ready to hit them with our best punch as well."

Flames sophomore midfielder Carter Elliott could again be relegated to a limited role as he recovers from an injury sustained in a 12-11 upset of No. 10 Arizona State, March 10 at home.

The game is a highlight of College For A Weekend (CFAW) late-night activities and McQuillan hopes to attract hundreds of CFAW fans to complement the Flames' regular fan base and other Liberty students who live for "Midnight Mayhem" matchups.

Weather-permitting, flamethrowers will be set up on either side of the scoreboard to celebrate every Liberty goal. Concessions will be available throughout the contest.

"We have some promotions and giveaways planned at halftime, but we're hoping the lacrosse game will provide most of the entertainment," McQuillan said.