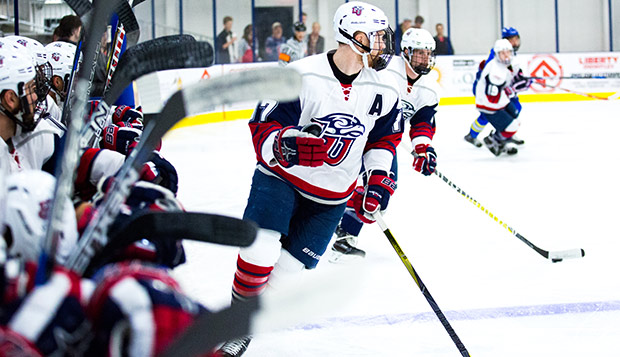 Flames forward Grant Garvin will play one more game in the LaHaye Ice Center, for the Roanoke Rail Yard Dawgs in next week's SPHL playoffs. (Photo by Andrew Snyder)

Senior men's hockey forward Grant Garvin, the leading scorer in ACHA Division I in 2017-18 and Liberty University's points leader in each of the past three seasons, signed an amateur tryout contract with the Roanoke Rail Yard Dawgs on Wednesday.

He will be reunited with former Flames defenseman Cam Bakker, who signed with Roanoke in late January, and will make his professional debut on Friday night when the Rail Yard Dawgs close out the regular season against the Southern Professional Hockey League (SPHL)-leading Peoria (Ill.) Rivermen at Carver Arena.

Garvin was selected as an alternate captain for his senior season when he led Liberty (30-7) to a team-record 19-game winning streak and ESCHL regular-season and tournament championships. He paced the ACHA with 25 goals and 49 assists for 74 points in 36 games (more than two per contest), ranking third in Flames DI single-season scoring history. He completed his four-year career at Liberty with 75 goals and 103 assists in 134 games, putting him fifth on the team's all-time scoring list.

Due to a scheduling conflict in the Berglund Center in Roanoke, where the Flames formerly played their home games before building their on-campus rink in 2006, the Rail Yard Dawgs will host their first SPHL playoff game next Wednesday, Friday, or Saturday night in the LaHaye Ice Center.

As the seventh- or eighth-seeded team in the 10-team league, Roanoke clinched its first playoff berth last weekend after not qualifying for postseason play in its inaugural season last year. The Rail Yard Dawgs will find out their first-round opponent and playoff dates on Sunday, when tournament seeds are finalized.