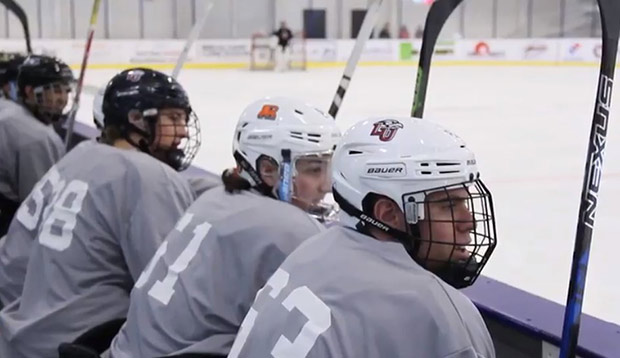 More prospective ACHA Division I, II, and IIII men's hockey players than ever before will visit Liberty University from Thursday through Saturday for its annual Flames Hockey Prospect Camp in the LaHaye Ice Center.

"We have almost 100 men's players registered, a wide variety of guys coming in from all over Canada and the United States," Flames DI Head Coach Kirk Handy said. "All three teams have continued to push to get better every year and we definitely feel like there is a lot of excitement around campus."

As usual, the recruitment camp will be held in conjunction with College For A Weekend (CFAW).

"That's the biggest part for us," Handy said. "To have the players experience Liberty and to participate in school activities through College For A Weekend is huge."

Head coaches and assistants from all three men's programs will help evaluate players — ranging from sophomores to seniors in high school as well as junior hockey league players — in competitive scrimmages against current Liberty DI, DII, and DIII team members, who are already in training for next season.

"We hope to establish relationships with potential recruits for the future as well, so we want to encourage younger guys to be a part of the weekend," Handy said.

Prospective players will arrive Thursday with the first goalie session slated from 2-3:30 p.m., followed by the first three Red, White, and Blue Prospect Games at 3:45, 5:30, and 7:15 p.m., respectively.

Among the prospects being evaluated this weekend are younger brothers of Flames freshmen forward Cole Gammer (the ESCHL Rookie of the Year) and year/position Devin Pierce.

Liberty's DI and DII women's coaching staffs will also have several prospective players in town this week. Head Coaches Chris Lowes and Sara Niemi will be looking to bolster lineups that led the Lady Flames to their second ACHA DI National Championship in four years and the DII squad to its most successful season to date and first postseason appearance.