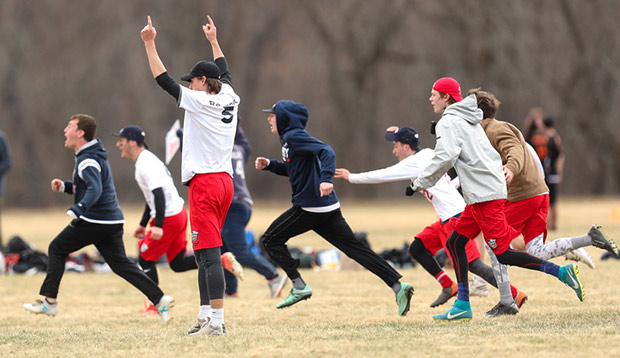 Liberty University's men's Ultimate team placed second in its five-team pool and fourth overall in this past weekend's 20-team New England Open in Springfield, Mass. It was the Flames' final competition before hosting the Virginia Conference Tournament at the Liberty Intramural Complex on April 14-15.

"This was our first tournament where we've had basically our full complement of players and we are definitely trending in the right direction," Flames Head Coach Brendan Phillips said.

Competing for the first time in six weeks, Liberty lost its first round of pool play to Bowdoin (Maine) College, 13-6, before winning its last three over Bentley (Mass.) University, 13-7, Boston University, 13-9, and Wentworth (Mass.) Institute of Technology, 13-6.

The Flames then staged their biggest victory in Sunday's playoff quarterfinals, rallying from a 7-3 halftime deficit to upend New Hampshire, 13-12 in overtime.

"That was a nail-biter and definitely the highlight of the tournament from the team's perspective," Phillips said. "Our offense was great and our defense was lights-out in the second half, when we just played phenomenally."

In the semifinals, Liberty lost to Pennsylvania, 11-8, before dropping a rematch with Bowdoin in the third-place match, 12-11 in sudden-death overtime.

Offensively, Flames freshmen cutters Ben Reutener and Daniel Mills paced the team with 16 assists apiece while Mills led the way with 15 goals and Reuterer ranked second on the team with 13 goals scored.

Defensively, sophomore cutter Drew Pettit made more than a dozen pass breakups. Freshman defensive line handler Pete Curran did not commit a single turnover over the weekend despite passing the disc in consistent 15-20-mph winds.

Liberty is currently 172nd in the USA Ultimate Division I rankings, making it the sixth seed out of nine teams at the Virginia Conference Championships. Virginia Tech, ranked 12th in the nation, is the favorite.

The Flames must place in the top five to earn a bid to the April 28-29 Atlantic Coast Regional championships in Axton, Va. That is a qualifier for the May 25-28 USA Ultimate DI National Championships in Milwaukee.