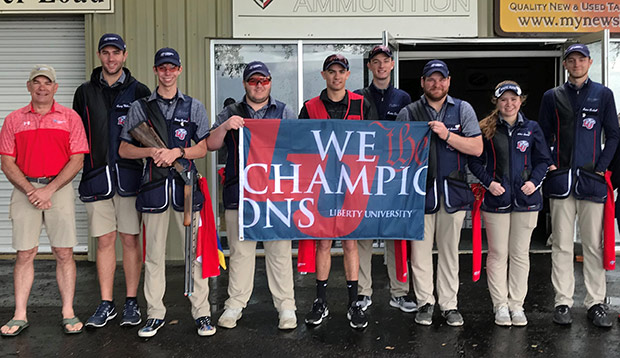 The Flames finished second out of eight teams in Division 4 in the All-American competition and third overall in the High Team Overall standings, which included International Skeet and Trap events.

"It definitely shows how much we need to improve for next year, but for our first year, we did fantastic," said freshman James Bushnell, who paced the Flames and tied for 174th overall out of 468 men's competitors with 511 points. "It's a great way for us to position ourselves to do even better next year."

Division 4 is reserved for first-year programs and community colleges. If Liberty sends more than 10 competitors to next year's nationals, it can move up to Division 2 or 3.

Liberty finished third among Division 4 programs in the American Skeet team competition with a total score of 463. Freshman Chloe Sterner, the Lady Flames' only competitor, scored a team-high 95 in that event and sophomore Tommy Hartman (92), junior Bob Allen (92), and junior Josh Lancaster (90) rounded out the Flames' top five performances.

"We had a couple surprises, with Jonathan Britton shooting a 99 in American Trap, Bob Allen shooting a 91 in Sporting Clays, and Chloe Sterner's performances in American Skeet," Liberty Head Coach Dave Hartman said. "We had five of our student-athletes shoot personal bests during the week, including Josh Lancaster, and (sophomore) Casey Williams."

Hartman was also impressed with the way his team members represented themselves and the university at their first national competition.

"Their conduct and attitudes were unsurpassed by any other team," Hartman said. "These athletes are absolutely the best in the world to work with and their performances will give us a great boost for our recruiting efforts."