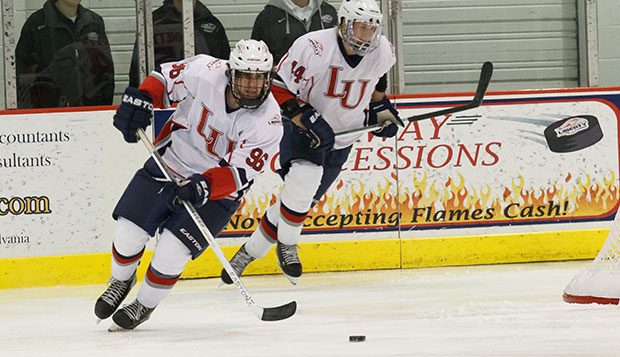 Following a 32-day layoff, Liberty University's Division I men's hockey team opens the new year with one of its most anticipated series of the season. The Flames fly out to Phoenix on Wednesday for a single game Thursday against the ACHA's top-ranked team, Arizona State, before boarding a bus for a 100-mile road trip down Interstate 10 to Tucson for back-to-back games Friday and Saturday at No. 18 Arizona. Liberty takes the ice against the Sun Devils on Thursday at 10 p.m. (Eastern Standard Time) and against the Wildcats at 9:30 p.m. (EST) on Friday and Saturday.

Liberty Scouting Report: Since dropping back-to-back games to defending ACHA national champion Delaware on Nov. 9 and 10, and the first of four meetings with Stony Brook on Nov. 17, the Flames have won five of their past six contests, including three straight against the Seawolves. After being ranked as high as No. 7 in the ACHA during their 8-0 start in September and as low as No. 14 after losing nine of 10 in October and early November, Liberty has risen back to No. 10 in the rankings, which is where it ended the 2011-12 season.

Senior forward Rick Turner leads Liberty and ranks fourth in the ACHA in points with 50 (30 goals, 20 assists). Ryley Egan is the Flames' next highest scorer with 29 points (10 goals, 19 assists), and Lindsay LeBlanc ranks third with 25 (10 goals, 15 assists). Egan is tied for 11th in the ACHA with six power-play goals.

Goalie Blair Bennett (2.97 goals against average) has had the hot hand of late for the Flames while Clayton Brown (3.68 GAA) is tops on the team with two shutouts.

Arizona State Scouting Report: The Sun Devils started off the season at 19-0, capped by consecutive wins at Oklahoma on Nov. 16 and 17, before suffering a humbling 8-3 defeat Nov. 30 at Penn State, a team that moved up to NCAA Division I this season. ASU retaliated with a 3-1 victory the next night and has remained the No. 1-ranked team in the ACHA for six consecutive polls since Nov. 1. That was the week after Liberty split a pair of games against top-ranked Ohio, ending the Bobcats' month-long run at No. 1. The Sun Devils have stretched their winning streak against rival Arizona to 28 games with four wins this season.

Kale Dolinski is ASU's leader with 44 points (24 goals, 20 assists) while Colin Hekle (19 goals, 21 assists, 40 points) ranks tied for second in the ACHA with four short-handed goals. Danny McAuliffe is the team's assist leader with 23 and has also netted 13 goals for a total of 36 points.

Arizona Scouting Report: The Wildcats are coming off back-to-back losses this past Friday and Saturday to Minot State (16-4) — a team that also defeated ASU on Jan. 3 — after opening 2-0 leads against the Beavers in both games. Those 6-2 and 5-3 setbacks ended AU's five-game winning streak.

Ansel Ivens-Anderson is Arizona's top scorer (17 goals, 18 assists, 35 points) while Andrew Murmes leads the ACHA with six game-winning goals (out of 12 scored) and has distributed a team-high 22 assists.

All-time series: Liberty is 0-1-1 versus Arizona State, including a shootout loss in last year's regular-season game. The other loss occurred in the ACHA national tournament in 2010. The Flames are 2-0 against Arizona after a 2006 sweep of the Wildcats in the first two-game series between the two programs.

Coaches: Kirk Handy is in his 13th season as Flames head coach, with an overall record of 271-117-13. Greg Powers, in his sixth season at Arizona State, picked up his 100th win with a 7-1 triumph over Williston State last Friday. A finalist for ACHA coach of the year honors last season, his overall record is now 100-20-7. He has the Sun Devils ranked No. 1 for the first time in program history as it seeks its first-ever ACHA national title. For Arizona, Sean Hogan is in his second season and has a 24-31-1 mark.