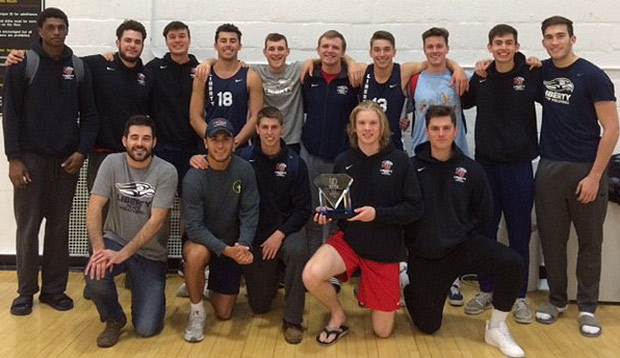 "It was not our best East Coast tournament finish for either team, but it was our best combined finish, which was impressive considering the overall competition was better than it has been in the past," Liberty Head Coach Bryan Rigg said.

Rigg said the Flames got stronger as the tournament went on, aside from the loss to NC State in the final round of pool play.

"The longer the day went, the bigger the opponent we faced, the better we played," he said. "Penn State and Virginia Tech were the heavy hitters and our blocking and passing picked up and we got into a rhythm with our hitting. By the end of the day, we were playing Liberty volleyball."

"Brady, Gene, and Kaden led us throughout the tournament and Jacob Holbert had a great day in the middle, as did Andrew Eves on the outside," Rigg said. "Sam Wyman played great on defense and in serve-receive passing."

Junior setter Eli Plasterer and freshman outside hitter Sean Taggart both made the All-East Coast Tournament team and Taggart was also selected to the ECVA South first team.

"They came up big at the net, with lots of blocks all the way around for those guys," Rigg said. "They were feeling it and were optimistic, encouraging each other. Caleb Pitcher played awesome and led the team in blocks while Sean Taggart led the team in kills."

Rigg said both the Flames' DI and DII teams, who will fly out of Lynchburg for St. Louis on April 11, should receive No. 1 seeds in their respective pools for the 48-team NCVF National Championships in St. Louis, where both will seek to qualify for the 16-team Gold bracket playoffs.